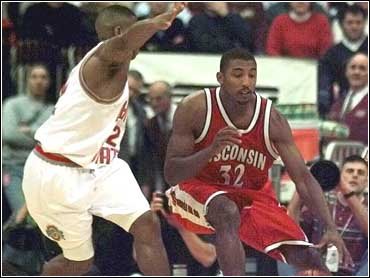 There were few style points and not many more baskets, but No. 5 Ohio State still found a way to get past Wisconsin 51-48 Wednesday night.

Overcoming a five-point deficit with just over 7 minutes left, the Buckeyes (15-3, 6-1 Big Ten) won their seventh in a row and 11th in their last 12 games. To do it, they had to weather two Wisconsin 3-point misses in the final seconds.

"We got the looks we wanted," Badgers coach Dick Bennett said. "We just couldn't put anything away."

The 51 points matched Ohio State's lowest point total in a conference win since 1982.

Michael Redd scored 14 points and Scoonie Penn added 13 for the Buckeyes, who won despite shooting 37 percent. They hit 12-of-14 free throws, although both misses came in the last 48 seconds.

Even though they trailed most of the game, the Badgers (11-10, 3-6) controlled the tempo. Tight defense, mixed with chest bumps and hand checks, held down the scoring at both ends.

Down as many as seven points in the first half, Wisconsin pulled even at 35 on a free throw at the 13:33 mark by Andy Kowske, who led the Badgers with 14 points and 11 rebounds. Following form, neither team scored on its next four possessions.

"That's a typical game we seem to get caught up in when we play Wisconsin," O'Brien said.

The Badgers' 9-0 run was built on their defense and ball-control offense. While Ohio State missed all but one of its 13 shots from the field, Wisconsin took a 40-35 lead on Mike Kelley's steal and assist on Charlie Wills' layup and Jon Bryant's 3-pointer from the right side.

The Buckeyes put up their first points since the 15:25 mark when Gorge Reese scored on a backdoor pass from Redd with 7:23 left. After a Wisconsin miss, Penn hit a 15-footer that went through the net while he hit the floor.

"We were not giving up anything easy," Bennett said.

Redd said, "That's the ugliest win I've ever been associated with at Ohio State. We didn't play well at the offensive end. Everyone was shooting jumpers and coach said, `You can't shoot jumpers against Wisconsin."'

Ohio State scored its next six points at the line two apiece by Redd, Penn and Brown to forge a 45-40 lead and complete a 10-0 run.

"We've been pretty consistent from the free-throw line all year long," said O'Brien, whose team is shooting 70 percent at the line

10 points higher than a year ago when it went to the Final Four. "I guess if you're not shooting the ball well elsewhere, you've got to get some points from the line."

Reese was fouled with 22.8 seconds and hit the second of two shots, with Wisconsin calling timeout to set up a 3-point attempt.

Center Mark Vershaw put up a shot behind the arc with 8.5 seconds left that missed, but Kowske rebounded and kicked it out to Kelley who misfired on another 3-pointer. The ball bounced under the basket as time ran out.

Kirk Penney added 10 points for Wisconsin, which shot just 32 percent from the field.

The low score backed up the teams' ranking as the two best defensive teams in the Big Ten. Wisconsin came in allowing just 56.5 points a game, with Ohio State second at 58.2.

"We handled their stars well," Bennett said. "We held our own on the glass. We did about what we had to do, but we came up short."