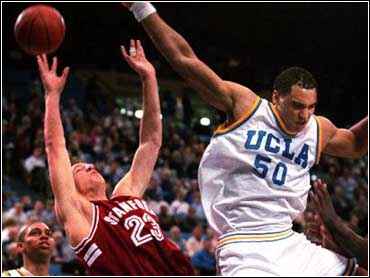 The mystique of Pauley Pavilion doesn't work on Stanford anymore.

Freshman Casey Jacobsen scored 12 of his 17 points over the final 13 1/2 minutes and the second-ranked Cardinal beat UCLA 78-63 Thursday night, its sixth straight victory over the Bruins and third in a row at Pauley.

"The crowd seemed to single me out," said Jacobsen, who is from Glendora and a friend of UCLA freshman Jason Kapono. "The more hostile the crowd, the more fun I have. It got so loud in here I couldn't think. You've got to be happy with a win at UCLA."

The Cardinal (18-1) maintained a share of first place in the Pac-10 with Arizona at 7-1 and improved to 26-4 on the road over the last three seasons.

"It's a different kind of pressure when you're highly ranked," Stanford coach Mike Montgomery said. "Our pressure is to stay with Arizona."

Except for a four-minute stretch in which UCLA whittled a 20-point deficit to eight points, the Bruins (12-7, 3-5) hardly put up a fight.

"In the second half we made a run, but Stanford was poised enough to counter that run and put us away," UCLA coach Steve Lavin said. "We've got to get better. We've got to put this one behind us."

Despite 23 turnovers, Stanford shot 55 percent and controlled the boards 37-23, including a 24-12 edge on the defensive end. The Cardinal set a school record with four blocked shots, giving them 118 for the season, one better than the record set in 1996-97.

Kapono led UCLA with 21 points. The Bruins' rebounds were a season low and they tied a school record with an 0-for-14 showing from 3-point range.

"We can be good and we've shown it in spurts. We just break down, maybe we just get down on ourselves," Kapono said.

Lavin earned a technical early in the second half and moments latethe Bruins found themselves trailing by 20 points.

But they livened up and outscored Stanford 17-5 to trail 49-41 with 13:31 remaining. Kapono had seven points in the spurt during which the Bruins stepped up their defense and forced turnovers while finally making baskets.

"We worked so hard to get it to eight, we didn't have any energy left," said Matt Barnes, who added 12 points.

Stanford wasn't on the ropes for long. Ryan Mendez hit one of its nine 3-pointers to start a game-ending 30-22 run and the Bruins never got within single digits again.

"We have no weaknesses," Jacobsen said. "We have leaders and leadership is so important. We have (David) Moseley and (Mark) Madsen to lead us. We wear on teams, little by little we break them down with our defense."

The Cardinal controlled the first half, using a 23-10 run, including five 3-pointers, to take a 38-22 halftime lead. The Bruins shot just 35 percent and missed all seven of their 3-point attempts.