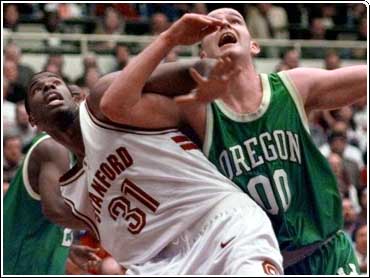 Stanford's stingy defense turned yet another high-powered offense into a mess of missed shots and lost chances.

Casey Jacobsen and Mark Madsen each had 19 points and Ryan Mendez added 14 as the No. 2 Cardinal, who hold opponents to the lowest shooting percentage in the nation, never trailed in a 76-61 win over No. 24 Oregon on Thursday night.

Oregon (16-5, 7-3 Pac-10) entered the game shooting 49 percent, the 11th-best mark in the nation. But the Ducks were held to 36 percent from the field by Stanford, including just 33 percent in the second half.

"Stanford plays like a No. 2 team. They're so smart as a basketball team," Oregon coach Ernie Kent said. "There were some times in the game we thought we could get them, and we played like it. But as soon as we made a mistake, they capitalized on it and stopped us cold."

Stanford (20-1, 9-1), which has won eight straight against Oregon, had eight blocked shots including four by Jason Collins despite the absence of its top shot blocker.

The Cardinal were missing reserve center Curtis Borchardt, who needs one block to tie the Stanford freshman record of 43 set by Tim Young in 1994-95. Borchardt is out indefinitely with a stress reaction in his right foot, a problem he aggravated last weekend. He'll also miss Saturday's game against Oregon State.

Alex Scales had 14 points and eight rebounds to lead Oregon. But A.D. Smith, the Ducks' leading scorer with 15.7 points per game, was held to two points in the second half and 11 overall.

Smith said Madsen, who led Stanford with 10 rebounds, seems to always be in the right position on the court.

"No one is stronger than he is," Smith said. "There's not one thing he dominates on. He sees shotand he sees rebounds and goes for them."

The Cardinal, who have won 20 games for a school-record sixth straight season, led by 11 points at halftime and took a 45-33 lead on David Moseley's 3-pointer with 3:05 gone in the second half.

Oregon scored six straight points to pull within 45-39, but the Cardinal responded with a 19-6 run that began with a 3-pointer by Mendez and was capped by another Mendez 3-pointer to make it 64-45 with 8@1/2 minutes remaining.

"They had some momentum going for them until Mendez made those points," Stanford coach Mike Montgomery said. "That (first) 3-pointer he made stopped Oregon from making a big run on us."

The victory was the first by Stanford against a ranked team since the Cardinal's 67-58 win over No. 2 Auburn in late November. Stanford had played only one other ranked school since then, a 68-65 home loss to No. 5 Arizona in early January.

Stanford led throughout the first half, with Tony Giovacchini's 3-pointer at the buzzer giving the Cardinal a 40-29 halftime lead. Jacobsen had 12 points in the first half to lead the Cardinal, while Smith had nine for Oregon.