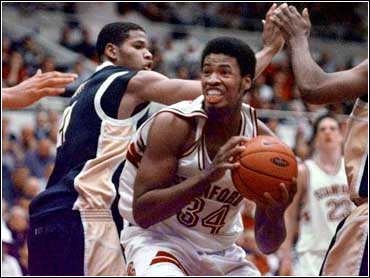 Stanford coach Mike Montgomery knows his team better than anyone and even he had a hard time believing what he was seeing.

In a display of absolute domination, the Cardinal overwhelmed regional rival California, using a runaway offense and bruising defense for a 101-50 victory Saturday.

The loss was the worst ever for Cal, surpassing a 44-point defeat to UCLA in 1968, when the Bruins were led by Kareem Abdul-Jabbar.

"That shouldn't happen. We're not 51 points better and we know that," Montgomery said. "It was just one of those games where everything we were shooting went in. I've been on the other end before. We did play well, but not only was this not expected, it probably won't happen again."

"We kind of lost our composure late in the first half when Moseley started nailing the shots from the outside," Cal coach Ben Braun said. "Give him credit. He stepped up early. He came off some tough screens and made them."

Stanford converted a season-best 64.9 percent of its shots during the game while its defense, ranked tops in the nation, held Cal to 33.3 percent shooting.

"I'd like to think we're that good but in my heart I know we're not quite that good," Jacobsen said. "The first time we played Cal, we beat them by 11 and it was a tough, physical game. We're probably somewhere in between 11 and 51 points better than them. Things were just clicking along perfectly."

"I wanted to leave something on the court for our fans," Moseley, a senior, said. "I've only got three home games left. I want to make the most of them."

Sean Lampley had 10 points for shell-shocked Cal, held to its lowest output of the season.

"The bottom fell out," Lampley said. "We all kind of lost our intensity. We weren't making the plays and you saw the result."

Lampley, asked if the Cardinal were that good, replied, "They're more than the real deal."

Cal tried to make a game of it at the outset. A dunk by Madsen and 3-pointer by Jacobsen gave Stanford a 17-10 lead but Nick Vander Laan scored from up close and Ryan Forehan-Kelly hit a jumper as Cal pulled within three points.

Then Stanford took over with the force of a blindside hit.

Jarron Collins muscled in a layup and Moseley knocked down a 15-foot jumper. Forehan-Kelly answered with another jumper before Stanford took off again, starting with an emphatic putback by Jason Collins and a long jumper from Moseley.

Then, epitomizing the direction of the game, Madsen wrestled a rebound away from Vander Laan, shoveled an outlet pass to Mike McDonald, who fed the streaking Moseley for a fast-break layup.

The surge carried forward to a 25-4 run that didn't even have a hint of ending until Shantay Legans hit a 3-pointer with 3:25 remaining in the first half, ending a 3 1/2-minute scoring drought by Cal.