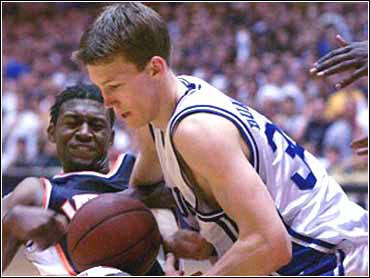 Mike Krzyzewski called it an aberration. Pete Gillen said it was more like intimidation. The end result was No. 2 Duke beating No. 10 Virginia in another lopsided game.

The Blue Devils (15-1, 4-0 Atlantic Coast Conference) used a 23-0 run in the first half Saturday to top the Cavaliers 103-61, notching their biggest victory margin over a Top 10 opponent in school history.

"Every time we come in here we get shook early," said Gillen, Virginia's coach, who is 0-6 against Duke with an average losing margin of 33.3 points.

"To have a chance against a great team like this you've got to get off to a decent start," Gillen added. "We just get unnerved and shook, then it becomes a tidal wave and they get more confidence and that's it."

Krzyzewski said his team may have played its best 40-minute game of the season and was surprised by the margin of victory.

Nate James scored 19 points, Shane Battier 18 and Jason Williams 17 as Duke beat Virginia for the 12th straight time and 33rd in 41 meetings since 1983. It also was the sixth consecutive time the Blue Devils have hit the century mark against the Cavaliers.

Duke's players had the word "attack" taped inside each locker. It had special significance for the Blue Devils as they tried to slow down the run-and-gun Cavaliers.

"The best way to beat a team like that is to attack and not play just to play with them," Battier said. "e really went to the boards hard, we drove strong, we went to the free-throw line a lot. It was good execution of the game plan."

"Hopefully we can regroup and get our act together and play the way we're capable of playing," Gillen said. "A lot of that today was Duke, a lot of that was us."

The Cavaliers shot a season-low 35 percent against the Yellow Jackets and turned it over 23 times.

It looked like their offense was lost again against Duke, which has won 50 of its last 52 ACC regular-season games. Virginia shot 27 percent and was held 30 points below its scoring average as Chris Williams led the way with 11 points.

The two teams had never met each other with both ranked so highly.

But this one was over in the opening 20 minutes as the Cavaliers missed 23 of their first 27 shots and turned the ball over 14 times as Duke rolled to a 4-0 start in the ACC for the fourth straight season.

"Our defense was very good and we were an extremely unselfish team," Krzyzewski said. "Virginia is an explosive team. They missed some open shots, and that always helps, but we didn't give them the lane. We protected the basket real well on drives and as a result we made them more of a half-court offensive team."

Both teams started slowly, but while Duke pulled it together offensively, the Cavaliers fell apart, shooting 19 percent in the opening half to fall behind 53-20.

Gillen used four of his timeouts in the first 13:13, but nothing he diagrammed slowed down Duke or energized his team.

Virginia's scoreless streak lasted 5 1/2 minutes as Duke scored 10 points in a span of 1:01 at one point, getting a driving layup from Nate James and a 3-pointer, a three-point play from Carlos Boozer and two free throws by Battier.

A three-point play by Chris Williams snapped Duke's run, but by that time the Blue Devils were up 39-9 and the only mystery was whether they would score 100 against Virginia.

The Duke lead reached 40 less than two minutes into the second half and J.D. Simpson scored on a baseline jumper with 1:56 left to hit 100 points.

"Mike was being kind," Gillen said of Krzyzewski. "They could have won by a lot more if they wanted to."