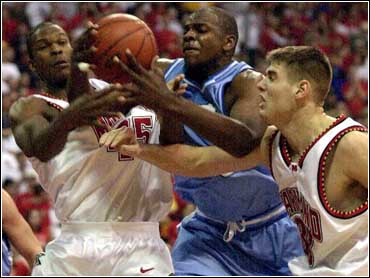 For the second straight season, Maryland will do no worse than finish second in the Atlantic Coast Conference. Given their horrid start, that's no small accomplishment.

Juan Dixon scored 18 of his 23 points in the second half, and the 19th-ranked Terrapins clinched at least a share of the runnerup spot in the ACC standings by beating North Carolina 81-73 Saturday.

Terence Morris had 16 points and nine rebounds for the Terrapins (21-7, 10-4), who have won eight straight ACC games in the same season for the first time in school history. Maryland's lone conference loss over its last 11 games came exactly one month ago at North Carolina.

After losing their first three league games, the Terrapins have beaten every ACC team at least once. That includes an upset win at Duke two weeks ago, the Blue Devils' lone conference loss over the past two seasons.

"At 0-3 we just kept our heads up, trying to dig ourselves out of a hole," said Maryland center Lonny Baxter.

The Terrapins now stand two games ahead of both Virginia and the Tar Heels in the conference. All three teams have two games left.

"We know we're winning, but we don't talk about how many we've won in a row or anything like that," Maryland coach Gary Williams said.

Maryland shot 37 percent from the field and went 5-for-12 at the line in the first half, but took advantage of 12 North Carolina turnovers to build a 37-27 lead. With Lonny Baxter on the bench with three fouls, Morris scored six points as the Terrapins closed the half with a 12-0 run that included a buzzer-beating jumper by Steve Blake.

"I thought their run at the end of the half was the difference," North Carolina coach Bill Guthridge said. "That stretch of 12 straight ponts put us in a hole. We had our chances in the second half, but we just couldn't capitalize."

Take away that 12-point binge, and the teams scored the same amount of points. Of course, it doesn't work that way.

"A lot of times when you're playing a good team, you only play better than them for a few minutes of the game," Williams noted. "I thought those couple of minutes might have won the game for us. That gave us momentum going into the second half."

North Carolina closed to 41-35 shortly after halftime before Dixon hit a 3-pointer and Baxter followed with a dunk. North Carolina then lost 6-foot-11 forward Kris Lang, who was called for his fifth foul with 14:27 to go.

After the Tar Heels got within nine points, Drew Nicholas sank a 3-pointer and Morris hit a 15-footer. Dixon then answered a dunk by Brendan Haywood with a jumper beyond the arc to put Maryland up 64-49 with 7:11 remaining.

Dixon kept North Carolina at bay with help from reserve forward Mike Mardesich, who finished with 10 points on 5-for-6 shooting. Mardesich saw extensive action in place of Baxter, who was in foul trouble for much of the game and finished with just seven points.

The Tar Heels finished with 17 turnovers, including 12 in the first half.

"Everybody has to stick to their role," guard Ed Cota said. "It seems like people are doing other things at times, like putting the ball on the floor and not running the play. We haven't been focused on the offensive end."