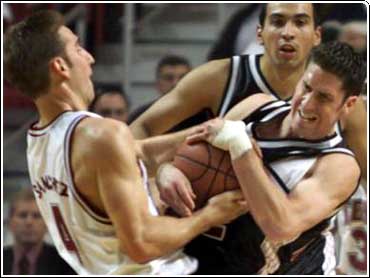 Sanchez doubled his previous season high with 20 points to lead No. 19 Temple to a 75-61 victory over Fordham on Thursday night.

"We made him shoot the ball but then he started to make shots. We were just playing the percentages," Rams coach Bob Hill said.

Fordham left Sanchez open for most of the first half, and the strategy worked for the first 10 minutes as he missed six of seven shots. Sanchez, who averages just 5.5 points per game, then hit six straight 3-pointers over the remainder of the game.

"I probably don't take enough shots. I should probably be more aggressive on offense," Sanchez said. "I'm much more conscious about passing the ball and playing defense."

Sanchez, known most for his passing and defense, scored 14 points in the first half including 4-of-4 on 3-pointers. He added nine rebounds and seven assists.

"He knows his job is mainly to distribute the ball, and he wants to do that first. He doesn't look for his shot," Owls coach John Chaney said.

Fordham (11-11, 4-6) had one consolation, becoming the first team in eight games to score more than 50 points against the Owls, who are allowing just 52.8 points per game best in the country.

Jason Harris led the Rams with 23, including 7-of-1 from three-point range, and Alejandro Olivares added 16 points on 8-of-11 shooting.

"Today we attacked their zone and we got off to a terrific start. They didn't score on us like last time," said Hill, citing the Rams' 78-61 loss to Temple at home on Jan. 12.

Temple took its largest lead of the game, 65-45, on a slam dunk by Kevin Lyde with 6:50 remaining. The Rams never got closer than 13 after that.

Temple has beat Fordham in their last 10 meetings, dating back to 1981.