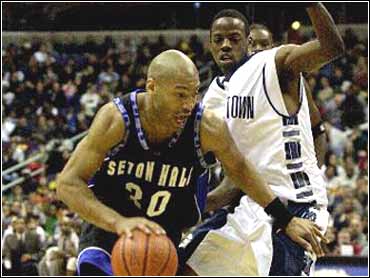 No one knew whether undefeated Georgetown was for real. Even the Hoyas weren't sure.

Overcoming a few nerves in one of their biggest games in years, the No. 19 Hoyas nearly pitched a shutout against Seton Hall's leading scorer as they beat the No. 11 Pirates 78-66 Saturday.

"I don't know if anyone's noticed, but we haven't lost a game yet," said coach Craig Esherick, when asked if he now had the team to beat in the Big East.

"If we haven't lost a game yet, it's either us or Boston College. I don't know if anybody believes either one of us are any good, but we'll have to play the season out and see. We can prove it on the floor."

Mike Sweetney's 14 points led five players in double figures, and the defense held Darius Lane without a field goal until the final 30 seconds. The Hoyas overcame 23 turnovers including six in the first half by point guard Kevin Braswell to put the game away with a 17-4 run midway through the second half.

"I was a little hyper at first," said Braswell, who finished with 11 points, 12 assists and seven turnovers. "This was our first really big game, first real contest to let us know we're good, and I got out of control in the first half. Coach came in here and said, `Kevin youve got to calm down.' "

The loss snapped a four-game winning streak for Seton Hall (10-3, 1-1). Lane, averaging 20.8 points coming into the game, was 0-for-14 from the field until a meaningless layup with 29.6 seconds to play and finished with five points. Lane had not scored fewer than 13 points this season.

"They put a lot of guys on me," Lane said. "My shots weren't falling."

Andre Barrett scored 16 points. Freshman Eddie Griffin had an impressive line 15 points, 13 rebounds, six blocks and four steals but he was 5-for-18 from the field and essentially a non-factor because of the defensive play of Ruben Boumtje Boumtje, who blocked five shots.

Braswell spurred the second-half run with a nice move to get open for a short jumper and drove the paint for a layup on the next possession. Scruggs added a pair of 3-pointers from the top of the key, retreating to midcourt and waving his arms to the cheering MCI Center crowd after his second one made it 57-47 with 10:50 to play.

At the other end, Georgetown's defense repeatedly frustrated the young Pirates, who reverted to a one-on-one mentality. Lane kept missing throwing up an air-ball on his 14th shot the Hoyas kept blocking shots, and a wide-open Ty Shine let fly with another wild air ball from 3-point range.

"They make you play that way because of the pressure," coach Tommy Amaker said. "When you have the ball, you can't run a play. You have to put it on the floor and make a play, and we didn't do that very well. ... I think we have a lot of growing up to do.

"They're as good as anybody we've faced. People maybe were reserving judgment until seeing them against us today, and I thought they proved that and more."