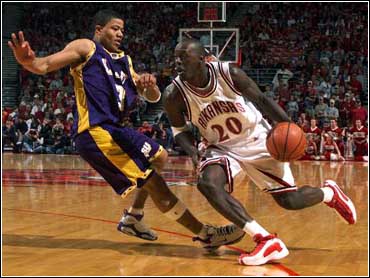 For the first 10-plus minutes of the second half, LSU couldn't shake Arkansas. Coming out of a timeout with a one-point lead, Tiger coach John Brady called for the "C-Lob."

Torris Bright dribbled 25 feet from the basket, then flicked a lob to Ronald Dupree, who used a screen by Brian Beshera to get free. Dupree's dunk and free throw touched off a 10-point run that helped No. 16 LSU win at Arkansas for the first time, 78-67 on Saturday.

"We came down trading baskets with them in the second half and we needed a stop," said Arkansas' Joe Johnson. "Then they got that dunk and took all the momentum."

"We thought we could back-screen them and cut a guy to the goal and throw it up to the basket," Brady said. "We got the dunk and the foul and he hits the free throw."

Arkansas (13-12, 5-7) never led and was tied with the Tigers only once, at 35 in the opening minutes of the second half. Beshera then scored from 12 feet, putting the Tigers back on top.

Carl Baker missed a chance to give the Razorbacks the lead when he was called for walking on a fast break. The next time Arkansas was within one, Alonzo Lane missed badly from in close.

Lamont Roland sliced through Arkansas for eight in-close field goals and a game-high 23 points, and his ability to penetrate and pass led to several easy baskets by his teammates. The junior college transfer wound up with nine rebounds and six assists.

"He made big finishes on drives to the goal," Brady aid. "He was our best defender. ...It may be the best game he's played since he's been in an LSU uniform.

"Arkansas establishes good pressure but they are not very good when you take it straight to the goal," Brady said.

"Their guards were the difference," said Arkansas coach Nolan Richardson. "We did a good job defensing their big guys but their guards got to the basket and finished."

Breaking down the lane, Roland took a pass, then whipped a pass behind his back to Dupree, whose field goal and foul shot made it 46-41.

Bright's 3 made the lead seven, but Blake Eddins made a 3 and Johnson's steal led to a Brandon Dean layup. Lane's two free throws cut it to 52-51 before the Tigers' run.