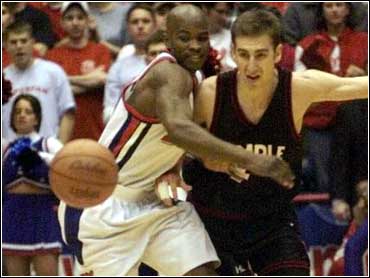 Quincy Wadley provided the offensive fireworks in the final minutes but as usual it was No. 15 Temple's defense that got the credit.

"We made key defensive stops down the stretch which in turn jump-started our offense," Wadley said after his 3-pointer and four-point play on consecutive late possessions powered the Owls to a 64-58 victory over Dayton on Thursday night.

Wadley, who finished with 17 points, scored 11 of the Owls' last 13 points in the showdown between the Atlantic 10's divisional leaders.

Dayton never got closer than four points again, with Wadley going 4-of-5 from the free throw line over the final 53 seconds.

"Those were two big 3-point shots," Dayton coach Oliver Purnell said. "Our defense let us down at critical points coming down the stretch."

Dayton tried the same tactic, relying almost exclusively on perimeter shooting against the Owls, who came in No. 1 in the country in scoring defense (53.8 per game). The Flyers were 11-of-26 on 3-pointers and only 8-of-22 inside the arc.

"The thing I have to give my team redit for is that they closed off the inside," Owls coach John Chaney said. "We shot well. I think that's the most telling thing for me. I try to measure us in terms of how we do when we don't shoot well. When you shoot well, everyone looks good."

Tony Stanley had 19 points and 10 rebounds for Dayton, while Brooks Hall had 15 points all on 3-pointers and David Morris added 11.

Asked if he was satisfied to take four more shots beyond the 3-point line than inside it, Purnell said, "I'd take 126 3-pointers if they were good ones."

Sanchez followed with a 12-footer before Lynn Greer stole a pass, drove the length of the court and flipped a pass back to Karcher who hit the open 3-pointer on the fastbreak to make it 51-44 with 8:22 left.

Dayton didn't score for 5@1/2 minutes until Stanley scored on a rebound follow, Morris hit two foul shots on Sanchez's fourth foul and Holland dunked to set the stage for Wadley's heroics in the closing moments.

The Owls remained in Ohio after the game, awaiting a Sunday showdown with top-ranked Cincinnati.

Chaney said he didn't expect his team to dominate inside against the brawny Bearcats.

"I don't want anyone shooting around Kenyon Martin," Chaney said of the Cincinnati center with a laugh. "There'll be no points scored by Lamont Barnes or Kevin Lyde or Keaton Sanders. I want to win the game 2-0. If we get the ball, I'm going to tell them just to hold on to it."