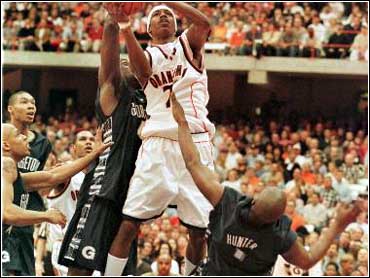 Jason Hart wanted to make sure his father's trip in from the West Coast was worth it.

The senior point guard, whose father saw him play for only the third time since he came to Syracuse, was successful in the Orangemen's 67-52 victory Sunday over Georgetown.

Hart had 15 points all in the second half as No. 13 Syracuse closed out its home schedule.

"I did everything the team needed me to do," said Hart, who also had seven rebounds, seven assists and only two turnovers. "I didn't force any opportunities. I found my little niches in the zone and made some easy shots."

And at the right time. When the game was still in doubt with just under seven minutes remaining, Hart scored 10 straight points to give Syracuse a double-digit lead. His baseline jumper, off a feed from Ryan Blackwell, put the Orangemen ahead 53-42 with 5:49 left.

"I wanted to win and we needed points," said Hart, who has 37 assists and only eight turnovers in the last four games. "I knew this was going to be my last opportunity to have a good showing in front of the Syracuse fans, and I just wanted to give them a good memory of me."

There were plenty on hand. A crowd of 31,009, the largest on-campus crowd in the country this season, turned out for the farewell for the team's three seniors Hart, Etan Thomas and Ryan Blackwell.

"The emotions were definitely high," said Thomas, who had four blocks to increase his career conference total to 225, second only to former Georgetown great Patrick Ewing's 247. "The crowd cheering, being out there with my family. You see the love and appreciation, and you're just thinking this is your last time on the court."

Syracuse (23-3, 12-2 Big East) remained just ahad of St. John's in the Big East and concludes its regular season with games this week at Notre Dame and Connecticut.

"We've got two really tough games," said Thomas, who was thwarted inside by Georgetown's Lee Scruggs and Ruben Boumtje Boumtje and had just eight points and four rebounds. "These are two of the toughest games we can have at the end of the season."

Barring a reversal of fortune in the upcoming Big East tournament, Georgetown (15-12, 5-9) likely will be headed to the NIT for the third straight year.

"I thought going into the game we attempted to do a good job keeping the ball out of Thomas's hands," Georgetown coach Craig Esherick said. "The zone helped accomplish that, but I didn't think we did a good job at all in transition defense."

The Hoyas led the conference in field-goal percentage defense coming in (37 percent). But Syracuse came alive in the second half, hitting 12 of 19 shots from the floor, several of them in transition, and finished the game at 48 percent.

The Orangemen gave the Hoyas a taste of their own medicine at the end, holding them to one basket in the final 4:58 a dunk in the final minute by Scruggs, who led Georgetown with 22 points. The Hoyas shot 31 percent for the game.

"We have to do a far better job shooting the ball if we want to compete at this level," Esherick said. "We have to figure out a way to either have the people we have shoot the ball better or find someone else who can shoot."

Preston Shumpert, who along with Damone Brown had 13 points for Syracuse, partially dislocated the middle finger of his shooting hand three minutes into the second half but only sat out briefly.

For the first eight minutes of the second half, it was Syracuse against Scruggs, who scored 10 of the Hoyas' first 11 points of the period.

Syracuse, which led only 27-25 at halftime, finally managed to build a big lead after Scruggs was called for his fourth foul with 11:32 left and was forced to sit.

At the break, 15 of the 25 former Syracuse players selected as members of the school's all-century team were honored. Among those in attendance were Dave Bing, Roosevelt Bouie, Dwayne "Pearl" Washington, Louis Orr, Rony Seikaly and Sherman Douglas. Hart and Thomas also were selected, and Jim Boeheim was picked as coach.