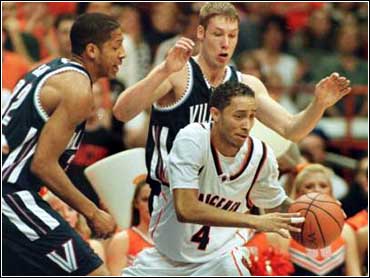 The funk is over for No. 13 Syracuse.

After losing three of their last six games, the Orangemen got 46 points from their reserves and forced 22 turnovers Wednesday night in a 91-63 victory over Villanova.

Starter Jason Hart led the way with nine points, a career-high 14 assists, three steals and only two turnovers. The win came off a disheartening one-point loss at St. John's on Saturday, and Villanova coach Steve Lappas saw it coming.

"I told my assistants today, these guys are going to come out and get after us hard," said Lappas, whose Wildcats had won five of their previous six. "That's what I was worried about. I was worried about their defensive pressure on the perimeter more than anything else, so I'm not surprised at what they did."

"This was strictly a great defensive effort," Syracuse coach Jim Boeheim said. "We haven't had this in a long time."

Not since an 88-74 win over defending national champion Connecticut a month ago.

"I think we sent a strong message," Hart said. "And it was a confidence-booster for us as well. I think we kind of questioned our ability, but we have it."

The Orangemen handed Villanova (16-10, 6-7) a loss it could ill afford if the Wildcats hope to make the NCAA tournament.

"This is the first time this has happened to us, especially when things have been going so well," Lappas said. "You wonder how the kids will respond."

Any visions Villanova might have had of extending its Carrier Dome winning streak to four quickly disappeared behind the Orangemen's determined man defensand hot shooting. They shot 51.4 percent for the game (36-for-70).

Syracuse used a 26-4 run in a nine-minute span early in the game to erase any doubts about the outcome.

"That was big," said reserve DeShaun Williams, who had 15 points. "That opened up a lot of early things. Once we hit some shots, they changed and they had to play harder. We made them play our game. We got some steals, got in the lane, and opened up a big lead."

While the Orangemen were hitting 12 of their first 20 shots, the Wildcats sputtered, converting just 3-of-14. Villanova, which entered the game hitting 36 percent of its 3-point shots, missed all nine attempts in the first half.

"They were just pressuring us, getting in the passing lanes," said Malik Allen, who had 13 points for Villanova. "They made it tough for us to make a lot of passes. They did a great job getting into it from the start of the game to the end."

Ryan Blackwell, who had 10 points and nine rebounds, began the Syracuse splurge with two rebound baskets, Preston Shumpert hit a 3-pointer, Etan Thomas converted a three-point play and Williams contributed a pair of 3s to put Syracuse up 32-10 with 9:42 remaining in the opening half.

Hart's hustle he had eight assists and one turnover in the first half keyed the Orangemen's rush to a 46-30 at the break.

"I think this is our best defensive performance of the year," said Shumpert, who also had 15 points in a reserve role. "Everybody played well tonight."

A layup by Brooks Sales got Villanova within 13 points at 46-33 in the first minute of the second half, but the Orangemen got a layup from Blackwell, a 3-pointer by Shumpert, a dunk by Etan Thomas off a Blackwell feed underneath, and a pull-up jumper by Shumpert to boost the lead to 56-36 with 17 minutes left.

Ricky Wright had 18 points and Sales 11 for Villanova. Brian Lynch, who was averaging 11 points a game, missed all nine of his shots from the floor and did not score.