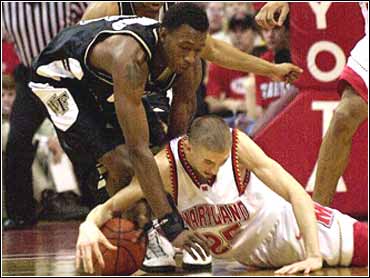 If the Maryland Terrapins had any sleeves to roll up, they would have done so.

No. 12 Maryland decided to get physical against 10th-ranked Wake Forest on Wednesday night, and the result was a surprisingly easy 81-71 victory.

Juan Dixon scored 30 points and Lonny Baxter had 18 points and 15 rebounds, leading the Terrapins to their first win in four tries this season against a ranked team.

"I'm really proud of the way we went to war," Maryland coach Gary Williams said. "That was a game we needed, because it proved we can play with a physical team."

Terence Morris scored 20 points for the Terrapins (13-4, 4-1 Atlantic Coast Conference), who recorded their first home win against a Top 25 team since 1998, against North Carolina.

"We had to beat a team that was ranked. Might as well do it tonight," Williams said.

Unlike their other two losses by one point at North Carolina and in overtime at Georgia Tech this one wasn't close.

The game featured 49 fouls, including four technicals three against the Demon Deacons.

"It was a difficult game, with a lot of emotion on both sides," Wake Forest coach Dave Odom said. "Obviously, our team didn't handle the emotion. Actually, we failed miserably."

The Demon Deacons also faled in their effort to stop Dixon, Baxter and Morris.

"We came in knowing those were the three players we had to deal with defensively. Obviously we didn't do a good job on any of those guys," Odom said.

"Our so called `Big Three' really played well in a big game. It was good to see," Williams said.

Morris scored five points and Dixon twice went the distance after a steal during a 12-0 spree that put Maryland up 31-21 late in the first half. After Morris hit a follow shot and Dixon scored from the corner immediately after halftime, Wake Forest never got closer than seven points.

Maryland led 58-45 with 13:29 left and 67-55 with eight minutes remaining. It was 71-64 before Morris scored on an alley-oop off a fine pass from Steve Blake with 4:49 remaining, effectively ending Wake Forest's slim hopes of a comeback.

For the 17th time in as many games, Maryland led at halftime. Holding O'Kelley scoreless on 0-for-5 shooting and getting 13 points from Dixon, Maryland built a 41-33 lead.

After Wake Forest opened the game with a 6-0 run, the Terrapins responded with 10 straight points. Minutes later, as the game became more physical, Odom received a technical foul.

Then, during an 8-0 run by Wake Forest, Williams was slapped with a technical. But shortly after that the Terrapins went on their pivotal 12-0 run.

"We came out playing with passion and a lot of emotion and got the win," Baxter said. "We were really flying and attacking."