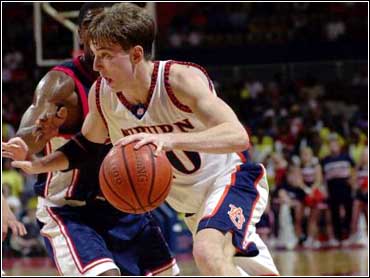 On a day dedicated to him, Reggie Sharp made the two biggest baskets of his Auburn career.

Sharp, a junior guard from Mississippi who walked on at Auburn last season, was the featured player on the game programs Saturday because the Tigers were playing Ole Miss.

He missed his first five shots of the day, then stepped up in the final 1:27 with two big baskets to lift No. 12 Auburn to a 75-72 win over Mississippi.

Beating the Rebels, who Sharp watched growing up in Shannon, Miss., had little effect on him. Delivering on his day did, though.

"Mississippi, Florida, Tennessee, it doesn't matter just as long as we win," Sharp said. "But on my day, that might make it a little sweeter for me."

Auburn coach Cliff Ellis said he knew it was a special win for his reserve guard.

"I'm real proud of Reggie, him being from Mississippi and he knows many of those guys," Ellis said. "I hope he enjoys it."

It was the 30th straight homecourt win for Auburn (21-4, 9-3 Southeastern Conference), which avenged last month's 79-77 overtime loss to the Rebels and held on to its one-game lead over LSU in the SEC Western Division standings.

"This is a great group of guys and they bounced back, but we came here to win and I thought we could," Ole Miss coach Rod Barnes said. "Since you have beaten Auburn once you feel like you can beat them again, so I was very disappointed to lose."

Auburn was clinging to a 68-66 lead when Sharp, who had moved to small forward because Chris Porter had fouled out, sank a 3-pointer with 1:27 to play to put Auburn up 71-6.

Mississippi's Jason Flanigan answered with a 3-pointer at the other end to make it 71-69 with 1:03 to play, but Sharp hit a running jumper with 37 seconds left that made it 73-69.

"Those were two large shots for Reggie," Auburn guard Scott Pohlman said. "We needed someone to come off the bench and give us a spark. If we want to go far into the season we need the other guys to come in and help."

Mississippi tried to answer Sharp with another 3, but Jason Harrison missed. Ole Miss fouled Daymeon Fishback on the inbound pass and Fishback made both free throws to stretch Auburn's lead to 75-69.

Flanigan then hit a 3 with 3.8 seconds to play that made it 75-72. The Rebels then fouled Pohlman on the inbound, and he missed the front end of a one-and-one. Ole Miss' desperation shot then fell short as time expired.

"They are a winning team and they find ways to win," Barnes said.

Pohlman led Auburn with 19 points. Doc Robinson and Porter scored 14 each and Mamadou N'diaye had 10.

Flanigan and Rahim Lockhart led Mississippi with 14 points each. Harrison and Marcus Hicks both scored 13 and Lataryl Williams added 10.

Auburn had a 68-61 lead with 2:38 to play, but the quicker Rebels closed the gap on a 3-pointer from Harrison, then Lockhart drew Porter's fifth foul and sank both his free throws to cut the score to 68-66 with 1:44 to play.

That's when Sharp came through.

"I had some good open looks at the basket," Sharp said. "I was in the game for awhile and I knew that is was time for me to get open."