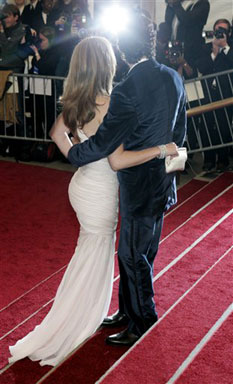 There were no tirades or "Who's Your Daddy?" taunts. Instead, Northwestern got a warm-and-fuzzy Bob Knight and some good, old-fashioned Indiana defense.

Knight made amends with Northwestern fans by tossing out candy before the game Saturday, and his players did all the trash talking on the court as No. 11 Indiana routed the Wildcats 89-67.

"They all know their roles," Northwestern coach Kevin O'Neill said. "I think they like playing with each other and I think they even kind of like coach Knight this year.

"They've got a good thing going."

They didn't waste any time letting the Wildcats know it. A.J. Guyton scored 14 of his 24 points in the first 11 minutes as Indiana (17-3, 7-2 Big Ten) jumped out to a 23-4 lead, and the Hoosiers cruised from there. By halftime, they had 48 points four off Northwestern's season average for an ENTIRE game.

But Indiana responded with two free throws and a hook shot from Kirk Haston and five free throws from Michael Lewis.

Lewis finished with 13, and Haston and Luke Jimenez each added 10 points. The Hoosiers were 52 percent from the floor, including 62 percent in the first half.

"I don't think we had anybody play quite as focused or quite as well in the second half," Knight said. "When we play well, we're pretty good. But there are times we aren't playing real well."

They played well enough to keep Knight out of trouble. This was Indiana's first trip to Northwestern since the "Who's your Daddy?" fiasco last February, when Knight was so enraged by the student section's chants he got into a postgame confrontation with O'Neill, and the Welsh-Ryan Rowdies were ready for the combustible coach.

One of the students carried a sign that read, "Bobby, the DNA results are in: I'm your Daddy." Some of the Rowdies also donned camouflage or bright orange vests, a reference to Knight's ill-fated hunting trip this summer, when he accidentally shot a friend.

One student had "Not a Deer" painted on his chest in red letters, with an arrow pointing to his buddy, who had a red-and-white bullseye on his stomach.

But Knight got the best of the fans this time. He came out to the floor carrying a bag of red-and-white peppermints, tossing them to the students as their boos turned to laughs.

"I just had a lot of candy. I wanted to share it," Knight deadpanned after the game. "I couldn't eat it all. I'm on a diet."

Knight did engage in a little horseplay after the game, playfully putting his hands around O'Neill's neck. It was just two friends joking around, O'Neill said.

"That whole thing last year got blown out of proportion," O'Neill said. "The guy does a whole lot of good things. Once in a while, like the rest of us, he does something stupid. But you can't blame anybody for that."

While Knight disarmed the Rowdies with the candy, his team didn't give them much ammunition, either. The Wildcats were busy trying to figure out what they were supposed to do with the basketball as Indiana put on a clinic.

They ran their offense so smoothly the first half Knight had little to yell about, shooting 62 percent from the floor and 57 percent from 3-point range. They rebounded almost instinctively, with Larry Richardson seemingly always there for the putback whenever Guyton missed a long jumper.

And defensively, they were simply stifling. Northwestern missed its first seven shots and turned the ball over five times in the first six minutes. The Wildcats didn't score until Johnson's jumper from the top of the key with 12:15 left in the half.

"In the first half, they took us out of everything and we didn't respond very well," O'Neill said. "We got down and when you get down in a game like that, you're not going to win."

The victory was Indiana's 22nd straight over Northwestern. The Hoosiers haven't lost to the Wildcats since Jan. 11, 1988.