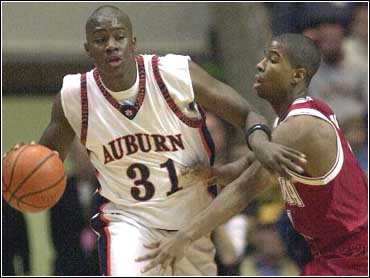 It usually doesn't take much to get Chris Porter fired up. It was no different against Alabama on Wednesday night, when a homemade sign did the trick.

About 100 high schoolers from Porter's hometown of Abbeville, Ala., made the 45-minute trip to Auburn to see him play against the Crimson Tide. In the second half, they caught his eye with a sign calling for a dunk.

It was all Porter needed to help No. 10 Auburn turn up the intensity and spark the Tigers to a 77-63 win.

"I didn't even know the kids from my high school were here until the second half started, then I saw the sign they made and it pumped me up," Porter said.

"In order for us to play they way we are capable, we must be intense the whole game," Porter said. "We didn't play for 40 minutes tonight, so in the second half we had to pick it up at both ends."

This season, the Tigers' three losses came when they were losing at halftime. But against Alabama, the Tigers used an early 17-7 run to wipe away the lead.

The Tide failed to make a basket for more than four minutes and turned over the ball five times during he stretch.

Injuries have Alabama down to 10 players, and reserve Alfred Moss was lost after playing only two minutes in the first half when he landed hard on his tailbone and had to be helped off the court.

That left the Tide with only seven scholarship players and 6-foot-5 walk-on Solomon Davis as the backup center.

"What can you do?" Alabama coach Mark Gottfried said. "We got tired and fatigued and it affected our guys defensively and it helped Auburn's rebounding. But what can you do? They played as hard as they could play."

As Alabama struggled, Auburn made its shots at the other end and used a 14-0 run to put the game away.

Mack McGadney and Scott Pohlman made consecutive jumpers and N'diaye and Porter made three free throws.

After Schea Cotton's turnover at the other end, Porter dunked in an N'diaye miss. Cotton turned the ball over again and Daymeon Fishback finished the fast break with a long 3-pointer. McGadney ended the spurt with a jumper that gave Auburn a 60-43 lead with 7:40 to play.

Alabama, which at one point had made just three of its 18 second-half shots, ended its scoring drought on Rod Grizzard's jumper with 8:01 to play. The Tide shot just 32 percent for the game and finished 6-of-24 from 3-point range.

"It was almost comical," Gottfried said. "Alfred got hurt, guys were in foul trouble and shots wouldn't fall. But our guys still played like it wasn't a factor."

Auburn outrebounded Alabama 45-35, only the second SEC team the Tigers have beaten under the boards this season.

"The concentration was better," Ellis said. "But we've been concentrating on that a lot this week."

Cotton, Alabama's leading scorer with a 16.3 point average, finished with 18 points on 6-of-19 shooting.