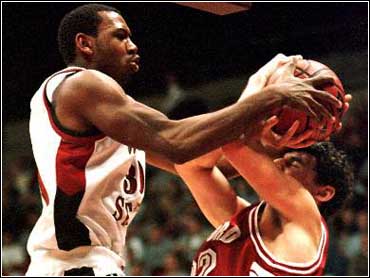 A little mental effort was all Casey Jacobsen and No. 1 Stanford needed to shake off early jitters and Washington State.

Jacobsen made seven 3-pointers and scored 23 points and Stanford overcame a slow start to beat the Cougars 89-52 in a matchup of teams at opposite ends of the Pac-10 standings.

Washington State (5-18, 0-14) stayed even in the opening minutes and forced three turnovers before David Moseley's 3-pointer put the Cardinal ahead for good at 11-8 with 12:32 left in the half.

"I thought in the first half we were a little sluggish," Stanford coach Mike Montgomery said. "I didn't think we were tuned in mentally."

After the Cardinal shot 7-for-15 from the free-throw line in the first half, Montgomery demanded more from his team in the second half. He got it.

"All of the sudden we started shooting the ball well," he said. "I do think it's concentration and energy level."

Stanford, which held the No. 1 ranking for three weeks earlier in the season, regained it this week after Temple ended Cincinnati's six-week run at the top with a 77-69 victory.

Washington State has lost 15 straight under new coach Paul Graham, the school's worst conference record ever. The Cougars, beaten 63-38 at Stanford on Jan. 29, have lost eight in a row to the Cardinal.

"They are a better team than we are," Graham said. "In order to beat them tonight, we would have had to play an almost perfect game on both sides of the floor."

"I told Mike as we walked off the floor that he has a chance to win the natioal title," Graham added.

Stanford, which entered the game shooting 39 percent from 3-point range, was 13-of-24 (54 percent) from beyond the arc Thursday night, with Jacobsen hitting 7-of-9.

The Cardinal, which led 39-22 at the break after shooting 46 percent, put the game away with an 18-2 run to start the second half. Mike Bush was the only Washington State player to score in the first 12 minutes of the period.

Washington State went on a 9-0 run in the closing minutes but got no closer than 31.

Bush had 18 points and Chris Crosby 12 for Washington, which hit 39 percent (20-of-51), 5 percent better than Stanford's average yield.