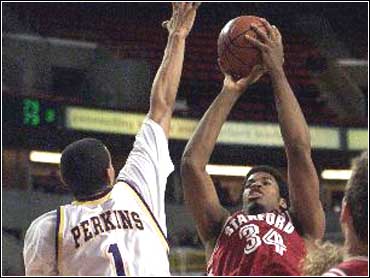 Another Stanford win, another frustrated opponent.

Mark Madsen scored 16 points and grabbed a career-high 20 rebounds as No. 1 Stanford shut down Washington in a 77-52 win on Saturday.

The Cardinal, who lead the nation in field goal percentage defense, held the Huskies to 32 percent shooting.

"That's kind of been our mantra all season play defense, rebound and you're going to win," Madsen said.

"The thing that has been so good for us has been our defense," Stanford coach Mike Montgomery said. "We have sold the team on the idea that defense can keep you in every game."

"Our offense can come and go, but it's the defense that's going to make the difference if we're going to do well in the NCAA tournament," Collins said.

Walcott's 3-pointer with 13:54 remaining in the game capped a 12-4 Washington run that pulled the Huskies to within 46-35, but they got no closer.

Ryan Mendez scored five points as Stanford responded with a 13-4 run that put the game away.

Stanford has won six straight over the Huskies, the longest Cardinal streak in the history of the series.

Washington is 1-24 all-time against No. 1-ranked teams.

"Stanford is very strong in the post," Walcott said. "They have depth and a lot of talent, and that's what makes them so good."

The Cardinal jumped out to a 17-2 lead 6:05 into the game. During that stretch the Huskies hit just one of their first nine shots from te field and were outrebounded by Madsen 7-5.

With Stanford leading by 12 points, Madsen scored four points as Stanford outscored Washington 12-6 during the final five minutes of the first half to take a 39-21 halftime lead.

"Mark plays so hard, we just follow his leadership and intensity," Collins said.

The Cardinal have won their last three games by a total of 113 points, a school record.

For the season Stanford is holding opponents to 33.9 percent shooting. The NCAA record for best defensive field goal percentage in a season is 35.8 percent, set by Marquette during the 1993-94 campaign.

"We need to peak at the right time and we're doing that," Madsen said.