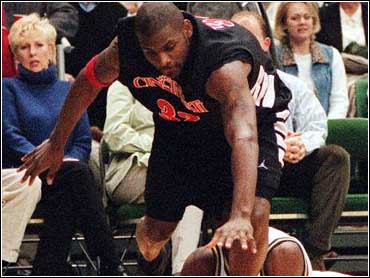 Not even a knock to the head stops Kenyon Martin.

Martin, who leaped so high on a block that he flipped and landed on his head one minute in, came back to score a career high 31 points and had 16 rebounds Saturday as No. 1 Cincinnati stopped UAB's 10-game home winning streak, 93-80.

"He's so tough that unless he was hurt really, really bad, he's going to go play," Cincinnati coach Bob Huggins said. "He is an absolute warrior.".

Martin was a one-man show for the Bearcats (22-1, 10-1 Conference USA), who were playing on just over one day's rest. He also carried Cincinnati with 20 points in Thursday night's 70-62 win at North Carolina-Charlotte.

Against the Blazers, who drew a record 9,279, he again powered Cincinnati with seven blocks and two steals to go along with his scoring and rebounding. He was 10-of-16 from the field and made 11 for 14 at the line.

Martin played all but seven minutes, his longest rest coming after he fell while blocking Myron Ransom's shot. Martin lay face down on the court for about a minute and had to be helped up.

He went to the bench rubbing the back of his head, but after the trainers checked his vision, he was back on the court with just 1:01 of game time gone from the clock.

"My fingers were numb for a minute while I was othe floor, but it was no big deal," Martin said. "I was ready to go back in. When someone thinks you're hurt, they try to take advantage of you and I wasn't going to let that happen."

Martin immediately claimed the inside game upon his return, forcing UAB (12-8, 5-4) to move its game outside early. The Blazers couldn't adjust and quickly found themselves in a deep hole.

"He's going to get his blocks, he's going to alter six or seven more shots and he's going to change the mindset of your team," UAB coach Murry Bartow said. "He's the best defender in the country, we knew that coming in."

UAB, which made just 5 of 20 shots through the first eight minutes and had six turnovers, quickly trailed 25-11. The Bearcats stretched their lead to as many as 17 in the first half and led 43-30 at the break.

Martin opened the second half with two series of made jump shots and blocks at the other end and made a pair of free throws to push the score to 49-36 with 15:28 to play.

"It's almost like he's goaltending on the blocks, but he just jumps so high the refs let it go," said Eric Holmes, who led UAB with 25 points.

For a time, Martin seemed to hit everything, scoring Cincinnati's first eight points of the second half over a six minute span. The rest of his teammates missed everything they threw up.

The Blazers used the drought to mount a mini-comeback, closing the score to 51-44 with 12:49 to play.

Cincinnati reclaimed the game, though, with a 14-2 run. Pete Mickeal, in foul trouble most of the day, converted a three-point play, Martin made a free throw and Steve Logan and Mickeal each connected on 3-pointers during the run to make it 63-46 with 10:35 to go.

"We kept cutting and cutting into it, but we could never get over the hump," Bartow said. "Part of that was because we obviously never found an answer for Kenyon Martin.

UAB got back in it once more, when Morris Finley's 3-pointer with 1:50 to play cut it to 85-76. But Martin answered with a driving layup that drew a foul and gave the Bearcats another double digit lead at 88-76 with 1:26 left in the game.

"When the game is going slow, it's my job to pick it up," Martin said. "When things get close, it's my duty to break it open."

Torrey Ward had 13 points for UAB. Ransom and Finley both finished with 10.