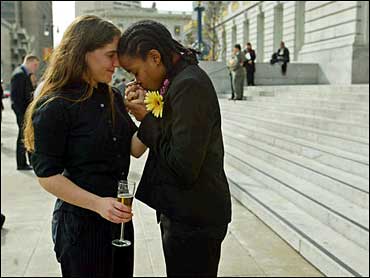 A county clerk in Bernalillo, New Mexico issued marriage licenses Friday to at least 15 gay couples, some of whom then exchanged vows outside the courthouse, and dozens more same-sex couples lined up for a chance to tie the knot.

The latest incident of gay civil disobedience came as foes of the weddings headed back to court in California to stop San Francisco from giving licenses to same-sex couples.

Dunlap said she made the decision after county attorney David Mathews said New Mexico law is unclear: New Mexico law defines marriage as a contract between contracting parties but does not mention gender.

"This has nothing to do with politics or morals," she said. "If there are no legal grounds that say this should be prohibited, I can't withhold it. This office won't say no until shown it's not permissible."

"When we heard the news this morning, we knew we couldn't wait. We had to come down here," said Jenifer Albright of Albuquerque, who exchanged vows with partner Anne Shultz.

Conservative groups headed back to court Friday in hopes of putting a stop to San Francisco's gay-marriage spree, as a defiant Mayor Gavin Newsom officiated at the wedding of one of California's most prominent lesbian politicians in his City Hall office.

A crowd of politicians and lawyers gathered for that wedding as other gay men and lesbians lined up to join the more than 3,000 same-sex couples allowed to marry so far.

About 25 anti-gay protesters later blocked the door of the county clerk's office, lying down in front of the line and singing religious songs. Gays and lesbians responded by belting out "The Star-Spangled Banner" until sheriff's deputies escorted the protesters out. No arrests were made.

Meanwhile, legal advocates for both sides were trying to get two challenges consolidated under one judge in a courtroom across the street. Over the past week, the two judges refused, for now, to stop the weddings.

In the San Francisco Bay area, 58 percent of those surveyed said they support gay marriage, according to the Public Policy Institute of California poll, which was based on a statewide poll taken Feb. 8-16 and had a margin of error of plus or minus 2 percentage points.

Newsom's actions have been greeted skeptically even by some gay-rights supporters worried that the move will backfire and build support for a federal constitutional amendment to ban gay marriage.

Feinstein noted that California voters four years ago overwhelming approved a measure that says only marriages between men and women are valid.

"If the mayor believes that law is unconstitutional, the place to go is the court," Feinstein said. "I believe this makes the national situation much more complicated and gives ammunition to those who are pushing for a constitutional amendment."

While defending its new marriage policy in court, the city also is suing the state, challenging its gay-marriage ban. The city contends the ban violates the equal protection clause of the California Constitution.

"The city's move really joins the battle and may even expedite a quicker resolution to this issue. After being a defendant in two cases designed to stop same-sex marriages, San Francisco now is playing offense by making its arguments that the equal protection clause of the California constitution not only permits the City to hand out these licenses but gives those licenses the force of law," says CBSNews.com Legal Analyst Andrew Cohen.

Gov. Arnold Schwarzenegger said that the state will reject the city's same-sex marriage certificates, and that Attorney General Bill Lockyer "will vigorously defend the constitutionality of the law" against gay marriage.

In a quick but festive ceremony Friday morning, Newsom officiated at the wedding of Carole Migden, who leads the state's Board of Equalization, and her partner of 19 years, criminal defense attorney Cris Arguedas. Earlier, Newsom had performed the weddings of his gay chief of staff and lesbian policy director.

"All over America, there have been stable, happy families that we've been seeing in this city for a week and a half, and we're very gratified to be among them," Migden said.

As to whether the city would comply with a judicial order to stop the weddings, the mayor said: "We'll do what's right."