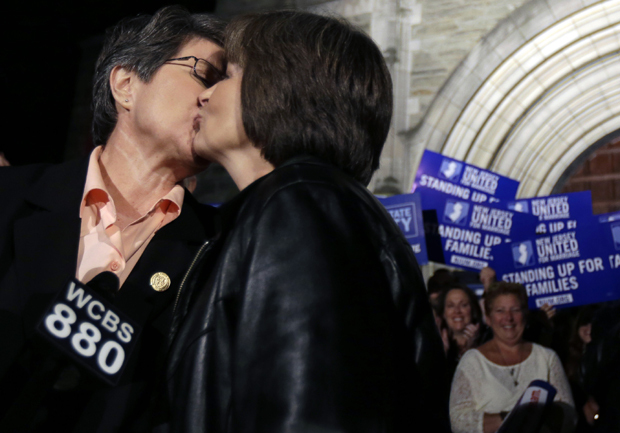 TRENTON, N.J. The state's highest court on Friday agreed to hear a case on whether gay marriage should be legal and whether same-sex weddings can be performed while it decides.

A lower-court judge ruled last month that the state must legalize same-sex marriage starting Oct. 21, but Gov. Chris Christie's administration said in a court filing Friday that a single judge should not be able to force New Jersey to do so.

The argument was included in a brief the state submitted in support of its emergency appeal after a state judge refused to delay her order that New Jersey legalize same-sex marriage as of Oct. 21.

"To overhaul such an ancient social institution prematurely, precipitously, or in a manner ultimately deemed unnecessary would injure not only the public interest, but the State that represents this interest," the state attorney general's office said in its brief.

The state Supreme Court accepted the case Friday, skipping the normal course of letting an appeals court hear it first. Oral arguments were scheduled for January.

Thirteen states, including most in the Northeast, already allow gay couples to marry. New Jersey offers gay couples civil unions but not marriage.

Same-sex marriage has been a political and legal issue in New Jersey for more than a decade, but it's probably never had the urgency it has now.

A group of couples plus the gay rights group Garden State Equality sued in July in an effort to get the state to recognize gay marriages in light of a U.S. Supreme Court ruling that cleared the path for the federal government to deliver marriage benefits to gay couples.

The administration of Christie, a Republican and possible 2016 presidential candidate, appealed both the overall ruling and Jacobson's decision on Thursday not to delay the due date.

State Sen. Barbara Buono who is running against Christie for governor and whose daughter is openly lesbian, accused Christie of delaying the inevitable for political gain, CBS New York reported last month.

"We have to stop treating our gay brothers and sisters as second-class citizens," Buono said. "My daughter should not have to go into another state to marry the person she loves, and I personally am offended by his stance."

The state argues that it has a reasonable probability of winning the overall appeal of Jacobson's ruling and that allowing same-sex marriages to move ahead in the meantime would be damaging.

As it has in other legal forums, the state says its law granting gay couples civil unions - but not marriages - should not be overturned because of federal action. Gay rights groups and Jacobson both disagreed, but the state believes it has a reasonable chance of prevailing with that argument in New Jersey's top court.

The plaintiffs in the lawsuit have until Tuesday to file legal papers in response. A ruling is expected before the Oct. 21 date when same-sex marriage licenses would take effect.

The Supreme Court said it will take oral arguments on overall case on Jan. 6 or 7. That's about a week before the end of the legislative term, which is the deadline for lawmakers to override Christie's 2012 veto of a bill that would legalize gay marriage.