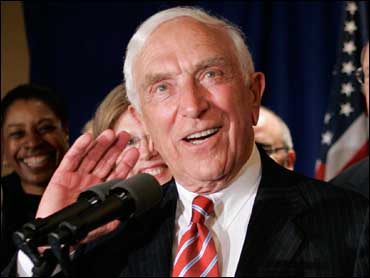 Udall was unopposed Tuesday for his party's Senate nomination while Republicans had a bruising two-way primary fight for the seat being vacated by six-term GOP incumbent Pete Domenici.

Pearce defeated Rep. Heather Wilson with 51 percent of the vote with 99 percent of precincts reporting. The party faithful selected a conservative - rather than the more moderate Wilson - to run against Udall, who won two statewide races as attorney general before his election to Congress in 1998.

During the campaign, Pearce branded Wilson as a liberal for her voting record, such as supporting a Democratic plan to expand a children's health care program. She called herself a "common sense conservative" who would be the more electable Republican in the general election against Udall.

In New Jersey, Lautenberg, 84, won a commanding re-nomination victory, easily besting a challenge from Rep. Rob Andrews and Morristown Mayor Donald Cresitello. Andrews often reminded voters that Lautenberg would be nearly 91 by the end of a fifth term, but Lautenberg insisted age wasn't an issue.

"They weren't looking at my age," Lautenberg said of voters, who gave the incumbent an 59-35 percent edge over Andrews with 99 percent of precincts reporting. "They don't care how old I am."

Lautenberg will compete in November against a former House member, Dick Zimmer, who defeated both a state senator and a business professor in the Republican primary.

In other contests across the nation: