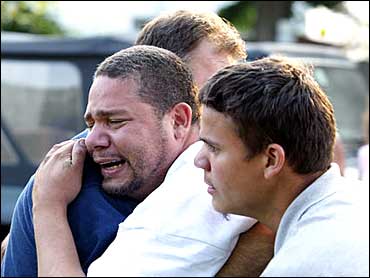 A massive search in Camden, N.J., for three boys has ended tragically.
Three boys who had gone missing earlier in the week were found dead Friday in the trunk of a car parked near the yard where they were last seen two days ago.

At a press conference late Friday evening, county officials expressed sadness and condolences to the victims' families, but gave few details of the case.

"We have a very fresh and active and ongoing investigation of this case," County Prosecutor Vince Sarubbi said.

The bodies of the three boys, who were ages 5 to 11, were discovered shortly before 7 p.m. by the father of one of the boys.

A neighbor, Carmen Cilla, said she saw David Agosto open the trunk of the maroon Toyota and collapse to his knees screaming.

Police rushed to the scene and immediately cordoned off the property with yellow crime scene tape, draping white sheets over the tape to shield the car from view.

Chief Edwin J. Figueroa said the vehicle seems to have been in the same location when the area close to the boys' homes was searched late Wednesday evening, shortly after the three went missing. He was unsure whether the trunk of the car was searched, but a bloodhound was used to search the area.

Yolanda DeNeely Aguilard, an aide to Mayor Gwendolyn Faison, confirmed that the bodies had been found. She had no immediate information on how the boys died.

The boys — Jesstin Pagan, 5, Daniel Agosto, 6, and Anibal Cruz, 11 — had vanished from the yard next to Anibal's home on Wednesday evening. About 150 law enforcement officials, including officers on boats, in helicopters, on all-terrain vehicles and using tracking dogs, had been searching for them Friday in a three-square-mile area where the boys were last seen.

Relatives had been worrying about how the oldest of the boys, who has limited mental abilities and attention deficit disorder, might fare without his medication.

"We've done everything we can," Jennifer Calo, an aunt of 11-year-old Anibal Cruz, said. "The only thing we can do now is hope and pray we'll turn around and they'll be walking down the sidewalk and saying, 'We're here.'"

Elba Cruz, Anibal's mother, said she was watching the boys play in the yard of her home Wednesday evening when she went inside for a few minutes. When she returned, the boys were gone.

A police dog tracked a scent taken from clothing belonging to one of the boys to an overgrown wooded area along the Delaware River, a half-dozen blocks from the Cruz home, Camden Police Lt. Mike Lynch said. The dog led police along a meandering path that eventually led to the river, but there was no sign of the children.

Lynch said late Thursday that officials considered the boys missing, but had not ruled out the possibility they had been abducted. During a news conference, he asked for residents to "be good eyes and ears."

"When you're talking about tender age children like that, it strikes a chord with anybody," he said.

Because there is no indication yet of foul play, the boys' disappearance did not qualify for an Amber Alert.

Authorities were using air support, ground and mounted patrols and boats on the river in the search, Lynch said.

Last fall, Camden was ranked the most dangerous city in the United States in a reference book that compares crime statistics. But the mostly Puerto Rican Cramer Hill neighborhood is considered a relatively safe place.