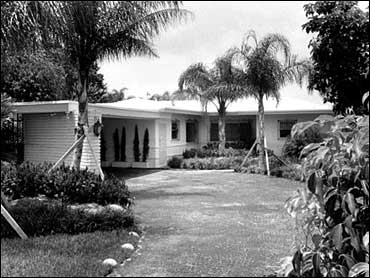 Former President Nixon's private sanctuary, known as the Winter White House, was razed to make way for a new residence.

The ranch-style home at 500 Bay Lane in the Miami island suburb was where plans for the Watergate break-in at Democratic headquarters were discussed and where Nixon retreated as the scandal unfolded.

"When he became president, he needed a getaway, and that became his Winter White House," said Paul George, history professor at Miami Dade College.

Nixon bought the home from his former Senate colleague George Smathers and visited at least 50 times while in office from 1969 to 1974.

The home's looks belied its fame, George said. "It was your basic, boring 1950s concrete-block home, low to the ground, thick walls, nothing glamorous about it," he said.

The house was part of a compound that included three other properties, a private beach and a floating helipad. Next door was a home owned by close friend Charles "Bebe" Rebozo, a banker who helped him with the purchase.

The current owner is developer Edgardo Defortuna, president of Fortune International Realty. He said in a statement that the property had "deteriorated significantly" over the years, and he and his wife "decided to build a new home that would be more suitable to our family."

Key Biscayne historian Joan Blank said a second story was added to the building after Nixon sold it.

"I guess that turned out to be the last hurrah," she said.