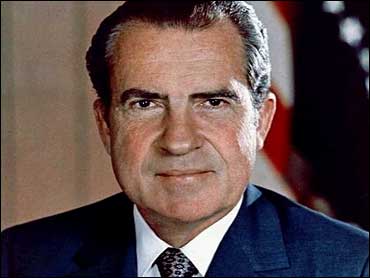 A daughter of Richard M. Nixon unequivocally denies her father struck her mother - and doubts the 37th president took an unprescribed mood-altering drug in the White House.

"Because I lived at home with them and my sister, I can state unconditionally that at no time during 1962 or ever did my father ever strike my mother or did my mother ever have physical signs or bruises of the type claimed in this book," she told The Associated Press in an interview Monday.

"My mother was not a fragile flower. She was very strong. She would have left forever if anything like that had happened," Mrs. Cox said.

Her late mother, Pat Nixon, "was my father's strongest supporter and really believed in what he was trying to accomplish."

Mrs. Cox lives in New York with her husband, Edward Cox, a lawyer, and speaks in public very rarely - far less than her younger sister, Julie. She sought out the interview to rebut allegations in The Arrogance of Power, a book by BBC journalist Anthony Summers that was published Monday.

"My parents ... are not able to speak for themselves now," she explained. "This needs to be said, because it's the truth. I was there."

Summers' allegations that Mr. Nixon struck his wife are based on secondhand or thirdhand sources. The most specific of Summers' allegations is that Mr. Nixon struck his wife either just before or just after losing his 1962 bid to become governor of California. That defeat was marked by his outburst to reporters: "You won't have Nixon to kick around anymore."

Summers writes that a now-deceased Los Angeles reporter, Bill Van Petten, told an unidentified friend that Mr. Nixon beat his wife "so badly she could not go out the next day."

And Summers writes that retired Washington lawyer John Sears, who worked in Mr. Nixon's successful 1968 campaign for president, told him that he had been told "that Nixon had hit her (Pat Nixon) in 1962 and that she had threatened to leave him over it. ... I'm not talking about a smack. He blackened her eye." Sears told Summers he learned this from two lawyers, both now dead, Waller Taylor and Pat Hillings.

Mrs. Cox noted that "these claims are based on statements attributed to two persons no longer alive by a man (Sears) who did not meet either of my parents until years after 1962."

Summers' book also claimed that in 1968, Mr. Nixon was given 1,000 capsules of the mood-altering drug Dilantin, an anti-convulsant used to counter epileptic seizures, by Jack Dreyfus, founder of an investment firm. Dreyfus later supplied another 1,000, it said.

Dreyfus told The New York Times he gave Mr. Nixon the drug "when
his mood wasn't too good." Dreyfus claimed the drug deals effectively with fear, worry, guilt, anger, rage, depression and other conditions. But the drug's side-effects include confusion, loss of memory and irritability, which former aide John Dean said top level staffers at the Nixon White House saw on a regular basis.

Dean told CBS News that Mr. Nixon "had a remarkable facility to put on an act. We could tell from the tapes that there were two Richard Nixons."

But the president's daughter Tricia said that just wasn't so.

"While I have no direct knowledge of what, if any, medications my father may or may not have taken throughout his life, I did have personal and daily contact with him," Mrs. Cox said. "What I do know is that his personality and his mood did not change. He was consistent."

She doubted he took medication to improve his mood, because "my father believed unless something was very serious you just avoided medication. He wanted to always be sharp and concentrated."

Her father declined Novocain at the dentist's office and "didn't take hay fever medication because it made him drowsy," she said.

"He was part of a generation that believed you should be stoical," she added.

Yet another claim in Summers' book was that the president had a serious drinking problem.

"I could smell alcohol on his breath, and often he offered me a drink," said Dean.

The drinking was so serious near the end of Mr. Nixon's presidency amid the Watergate scandal, the book goes on to say, that Defense Secretary James Schlesinger warned military units not to react to orders from the White House unless they were cleared with him or Secretary of State Henry Kissinger.

During an interview with CBS News Chief White House Correspondent John Roberts, Kissinger said he was "not aware" of Schlesinger's alleged warning to the military concerning Mr. Nixon.

"At the end of the Nixon Administration, I saw Nixon more than any member of his family or his chief of staff, Alexander Haig," said Kissinger. "It was a period of enormous distress. At no point did I hear President Nixon say anything that suggested he wanted to use military force."

Kissinger added he never heard that Mr. Nixon took prescription drugs - and denied that the president drank too much. He did say he thought Mr. Nixon "had a problem not being able to contain his alcohol" even when he only drank two or three glasses of wine.