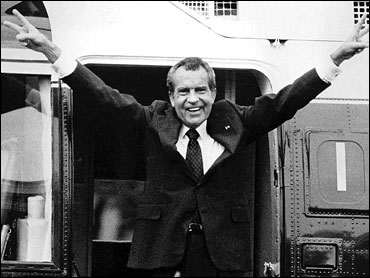 Until now, the late President Nixon has been the only president without his own federal library since the National Archives presidential library system began with President Hoover's library in Iowa.

The Nixon library currently operating in Yorba Linda, Calif., is a private one.

Nixon's presidential papers and tapes were seized by the government when he left office in 1974 following the Watergate scandal, and have been kept by the National Archives in College Park, Md. At the time, Congress mandated that the papers and tapes remain in the Washington, D.C., area.

In a brief interview Wednesday, Rep. Jerry Lewis, R-Calif., said he inserted the provision into a compromise spending bill for the Treasury and Transportation departments and smaller agencies. Bargainers from the two chambers agreed to the legislation Wednesday evening, and it is expected to be approved by Congress over the next few days.

Lewis said he became interested in the Nixon library after one of Nixon's daughters, Julie Eisenhower, spoke to him about it. Mrs. Eisenhower lives near Lewis' district, and Yorba Linda is nearby as well, Lewis said.

"This says we're going to lift that veil, if you will," on the Nixon presidency, Lewis said.

The language in the spending bill formalizes a process for representatives of the Nixon estate and the private Nixon library to begin talks with Archives officials about setting up a library under the presidential library system. Such libraries must meet certain specifications for preventing fires, preserving documents and other requirements.

There was no money for the Nixon library in the spending bill, Lewis said, but it could be provided in the future.

"Once Congress authorizes the establishment of an official presidential library, the National Archives will work with the Nixon estate to move the project forward," Susan Cooper, a spokeswoman for the Archives, said Wednesday. "In the meantime, the Archives is committed to processing and opening the Nixon materials to the public."

There are about 46 million pages of records and thousands of hours of tapes and other materials currently housed in the College Park facility. The last batch of the chronological Nixon tapes is scheduled to be opened on Dec. 10.