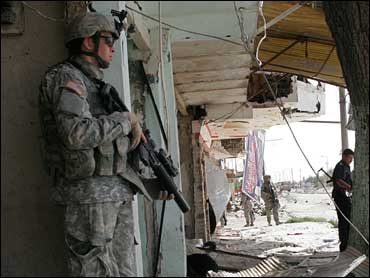 Nine U.S. soldiers were killed and 20 were wounded Monday in a suicide car bombing against a patrol base northeast of Baghdad, the military said.

An Iraqi civilian was also wounded in the attack on Task Force Lightning soldiers in Diyala province, a volatile area that has been the site of fierce fighting involving U.S. and Iraqi troops, Sunni insurgents and Shiite militias.

Of the 20 wounded, 15 soldiers were treated and returned to duty while five others and the Iraqi were evacuated to a medical facility for further care, the military said.

Identities were not released pending notification of relatives.

It was the second bold attack against a U.S. base north of Baghdad in just over two months and was notable for its use of a suicide car bomber.

On Feb. 19, insurgents struck a U.S. combat post in Tarmiyah, about 30 miles north of Baghdad, killing two soldiers and wounding 17 in what the military called a "coordinated attack."

It began with a suicide car bombing, then gunfire on soldiers pinned down in a former Iraqi police station, where fuel storage tanks were set ablaze by the blast.

Suicide attacks elsewhere in Iraq killed at least 46 people and left more than 90 injured, including a car bomb that exploded near a restaurant Monday afternoon, killing at least 19 people and wounding 35, police said.

The attack occurred on a highway near Ramadi, a city 70 miles west of Baghdad, said Ramadi police Maj. Fuad al-Asafia, who provided the casualty figures.

U.S. troops raced to the scene, found a pickup truck parked nearby that was loaded with explosives and chlorine powder, and destroyed it in a controlled explosion, al-Asafia said.

Ramadi, the capital of Anbar province, has long been a magnet for Sunni insurgents and a lawless haven for al Qaeda militants, but the U.S. military recently reported progress in securing and calming the city.

Earlier, four suicide bombers launched attacks in different parts of Iraq, killing 27 people and wounding more than 60, according to police and politicians.

Meanwhile, the American ambassador said Monday the U.S. would "respect the wishes" of the Iraqi government after the prime minister ordered a halt to construction of a three-mile wall separating a Sunni enclave from surrounding Shiite areas in Baghdad.

Any plan to build "gated communities" to protect Baghdad neighborhoods from sectarian attacks was in doubt after Prime Minister Nouri al-Maliki said during a visit to Sunni-led Arab countries that he did not want the 12-foot high wall in Azamiyah to be seen as dividing the capital's sects.

However, confusion persisted about whether the plan would continue in some form: The chief Iraqi military spokesman said Monday the prime minister was responding to exaggerated reports about the barrier.

"We will continue to construct the security barriers in the Azamiyah neighborhood. This is a technical issue," Brig. Gen. Qassim al-Moussawi said. "Setting up barriers is one thing and building barriers is another. These are moveable barriers that can be removed."

Al-Moussawi noted similar walls were in place elsewhere in the capital — including in other residential neighborhoods — as part of a nearly 10-week-old security operation. But hundreds of protesters took to the streets of Azamiyah to oppose what they called "a big prison."

"The main aim of these barriers is to protect civilians and to guarantee that security forces are in control and prevent terrorists from moving between areas," al-Moussawi said.

The U.S. military announced last week that it was building a three-mile long concrete wall in Azamiyah, a Sunni stronghold whose residents have often been the victims of retaliatory mortar attacks by Shiite militants following bombings usually blamed on Sunni insurgents.

But al-Maliki ordered construction halted on Sunday and U.S. officials said that the plans could change.

"Obviously we will respect the wishes of the government and the prime minister," U.S. Ambassador Ryan Crocker said Monday.

He said the barrier was aimed at protecting Azamiyah, not segregating it. Sunni leaders and residents of the neighborhood, however, complain that it is a form of discrimination that would isolate the community.

Monday's first suicide car bomb attack occurred near the northern city of Mosul at 10:10 a.m. when a suicide attacker detonated his car in front of an office of the Kurdistan Democratic Party of Massoud Barzani, leader of the autonomous Kurdish region in Iraq, an official with the group said. At least 10 people were killed and 20 wounded in the attack in Tal Uskuf, a town nine miles north of Mosul, said Abdul-Ghani Ali, a KDP official.

Ghanim Hazim, 37, a shop owner in Tal Uskuf, said dozens of people rushed past his store to the site of the blast to help the wounded, who "were screaming and asking for help as they lay buried under big pieces of debris."

He said residents of the predominantly Christian town were in deep shock because it was the first terrorist attack in their tight-knit community since the Iraq war started.

"This attack shows that no place in Iraq is free from the terrorists and their evil deeds," Hazim said in an interview as firefighters and police began removing the dead and wounded.