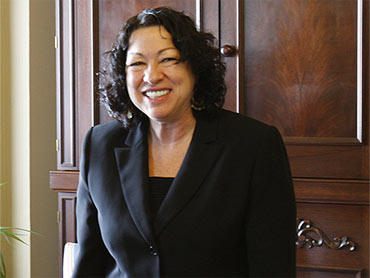 (AP)
Sonia Sotomayor was confirmed as the 111th Supreme Court Justice this afternoon by the Senate. Sixty-eight senators supported Sotomayor's confirmation and 31 opposed it.

Fifty-seven of the 58 Democrats in the Senate backed Sotomayor; the exception was Sen. Ted Kennedy of Massachusetts, who is battling a brain tumor and did not vote.

The two Senate independents who caucus with the Democrats, Sen. Bernie Sanders of Vermont and Sen. Joe Lieberman of Connecticut, also voted for confirmation.

Sotomayor Confirmation an "Easy One" for White House

Obama "Filled With Pride" Over Sotomayor