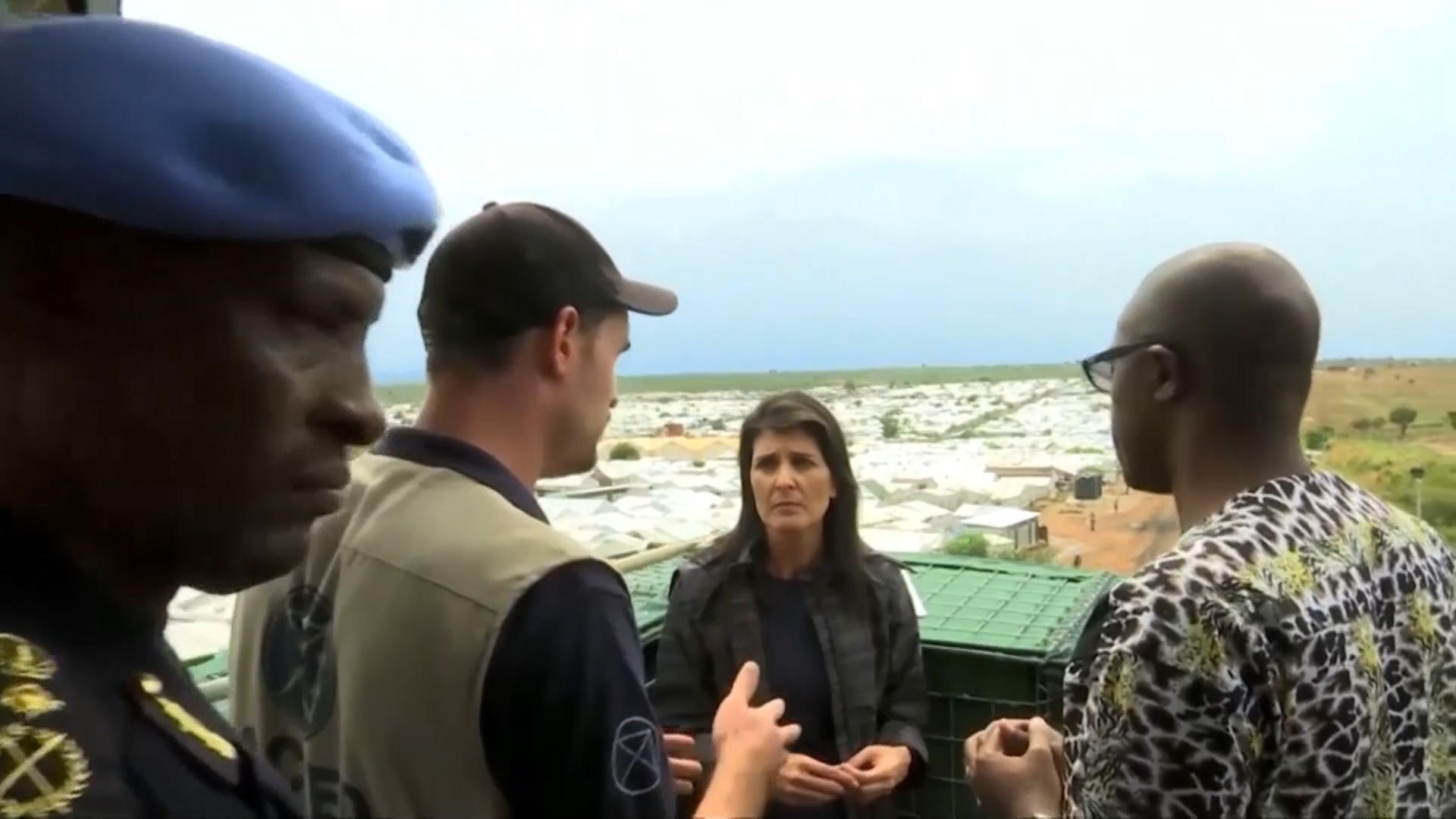 JUBA, South Sudan -- The U.S. ambassador to the United Nations, Nikki Haley, was evacuated from a U.N. camp for displaced people in South Sudan on Wednesday because of a demonstration against President Salva Kiir, witnesses said.

U.S. officials told CBS News that Haley was able to continue her trip, CBS News' Pamela Falk reports from the U.N., and Haley has already moved on to the Democratic Republic of the Congo.

Shortly after Haley left the camp, U.N. security guards fired tear gas to disperse the crowd of more than 100 residents who looted and destroyed the office of a charity operating there, an aid worker at the camp said. The aid worker spoke on condition of anonymity out of safety fears.

Haley, in the middle of a three-country African visit, met earlier Wednesday with Kiir over the country's long civil war. Speaking later to U.N. station Radio Miraya, Haley said she warned Kiir that the U.S. no longer trusted South Sudan's government and was no longer prepared to wait for change. She did not give details.

The United Nations confirmed the incident with Haley, saying camp residents "became upset that she was not able to meet with them, due to time constraint." The U.S. Embassy did not comment on Haley's evacuation.

Frustration has been growing inside and outside South Sudan over the conflict that has killed tens of thousands and created Africa's largest displacement of civilians since the Rwanda genocide in 1994.

"People are not happy," said one resident of the U.N. camp, who spoke on condition of anonymity for fear of his safety. He said camp residents had been waiting to hand Haley a letter with their position on the "current crisis." The U.N. said a "petition" was delivered before Haley's departure.

Haley is the highest-level U.S. government official to visit South Sudan since President Trump took office. She is in Africa to see the involvement of the U.S. and United Nations in Ethiopia, South Sudan and Congo,

In his meeting with Haley, South Sudan's president appealed for the Trump administration to stay engaged with his devastated country. According to a statement by his office, Kiir "emphasized his commitment" to end the conflict through peace talks that took place in the capital, Juba, last week and are expected to resume in December.

"All disputes can only be resolved through dialogue and not arms," Kiir told Haley, the statement said. Multiple attempts at peace deals have failed in the past.

The United States is South Sudan's largest donor and was instrumental in the country's creation. Since the East African nation gained independence in 2011, the U.S. has given more than $5 billion for humanitarian and development initiatives, according to the U.S. Embassy.

South Sudan plunged into civil war in late 2013, and the country faces mass displacement, starvation and allegations of government corruption and war crimes. More than 2 million people have fled the country.

Before her visit to the U.N. camp, Haley said on Twitter that she hopes South Sudan's peace process succeeds. "The pain in the stories of refugees from S.Sudan is a reminder we can't look away. We can't let armed conflict be their only choice," she said.

South Sudan's president also said he was working with the United Nations to increase access for humanitarian workers across the country ravaged by hunger. The U.N. has long alleged government restrictions on aid, including harassment by troops.

Rights groups have urged the United States to take a tougher approach to Kiir's government.