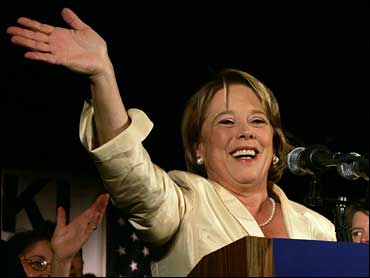 The widow of 1992 presidential candidate Paul Tsongas claimed victory in a special election for the U.S. House, becoming the first woman to represent Massachusetts in Congress in nearly 25 years.

Niki Tsongas, 61, beat back a stronger-than-expected challenge from Republican Jim Ogonowski on Tuesday to capture the 5th District seat and succeed Democrat Martin Meehan, who resigned to become chancellor of the University of Massachusetts-Lowell.

Tsongas said Wednesday that she expected to be sworn in on Thursday, and was eager to participate in the House vote scheduled for that day to override President Bush's veto of expanded funding for the State Children's Health Insurance program.

Tsongas will become the first woman to represent Massachusetts in either the House or Senate since 1983, when Republican Margaret Heckler left office after losing a re-election battle. The 5th District last had a female representative in 1960.

Tsongas won 51 percent, or 54,363 votes, compared to 45 percent or 47,770 votes for Ogonowski, whose brother John was killed aboard an American Airlines flight that crashed into the World Trade Center on Sept. 11, 2001.

Niki Tsongas was joined on stage during her victory speech by her three daughters, Ashley, Katina and Molly Tsongas, who jointly eulogized their father.

"I think (Paul) would have been very happy with this for lots of reasons, but also because as the father of three daughters, it's important to have diversity in the delegation," Niki Tsongas said. Paul Tsongas died in 1997.

Throughout the campaign, Tsongas, a dean at Middlesex Community College, and Ogonowski, 50, a family farmer who retired from the Air Force in June after a 28-year career, said their race would either serve as a referendum on the policies of the Bush administration, or mark a public upbraiding of the Democratically controlled House and Senate.

Local Democrats took particular pride in Tsongas's victory, especially in the context of potential redistricting. Massachusetts has been losing population and could be forced to surrender one of its 10 House seats after the 2010 Census, but a redistricting plan that eliminated the lone woman in the delegation could be difficult to pass in the Legislature.

Sen. Edward M. Kennedy, D-Mass., who once served with Paul Tsongas, said in a statement: "I know her three wonderful daughters - Ashley, Katina and Molly - are very proud of her, and I'm sure Paul is watching and smiling down on all of them tonight."