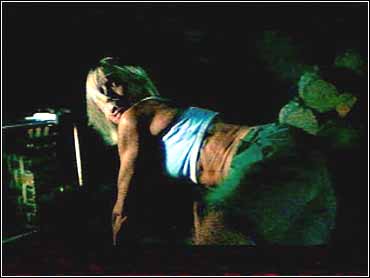 A Nike commercial featuring a woman sprinting away from a chainsaw-wielding masked man has been pulled from NBC's Olympics lineup, the network announced Monday.

Charles Denson, vice president of the athletic shoe giant, was disappointed in the network's response.

"I guess we felt it was a little ironic," he said. "They (NBC) preapproved the ad before it ran in the Olympic spot."

The ad begins with Hamilton spotting a man in a hockey mask, much like the character Jason from the Friday the 13th movies, preparing to attack her with a chain saw.

Hamilton runs off and keeps up such a strong pace the masked attacker collapses, wheezing exhaustion. The tag line of the ad says: "Why sport? You'll live longer."

The ad drew laughs from the crowd at Nike's annual shareholder meeting in Portland on Monday, along with a second ad featuring Olympic cyclist Lance Armstrong using mouth-to-trunk resuscitation to revive a circus elephant.

The answer to the question, "Why sport?" in the Armstrong ad is "Healthy lungs."

Earlier, before it was learned the ad had been pulled, Denson responded to an audience question asking whether the ad might be seen as encouraging violence toward women.

He said it was simply intended as a parody and Hamilton had fun filming the ad.

Strongest earthquake in 40 years hits Buffalo area: "Like a car hit my house"
Thanks for reading CBS NEWS.
Create your free account or log in
for more features.
View CBS News In
CBS News App Open
Chrome Safari Continue
Be the first to know
Get browser notifications for breaking news, live events, and exclusive reporting.