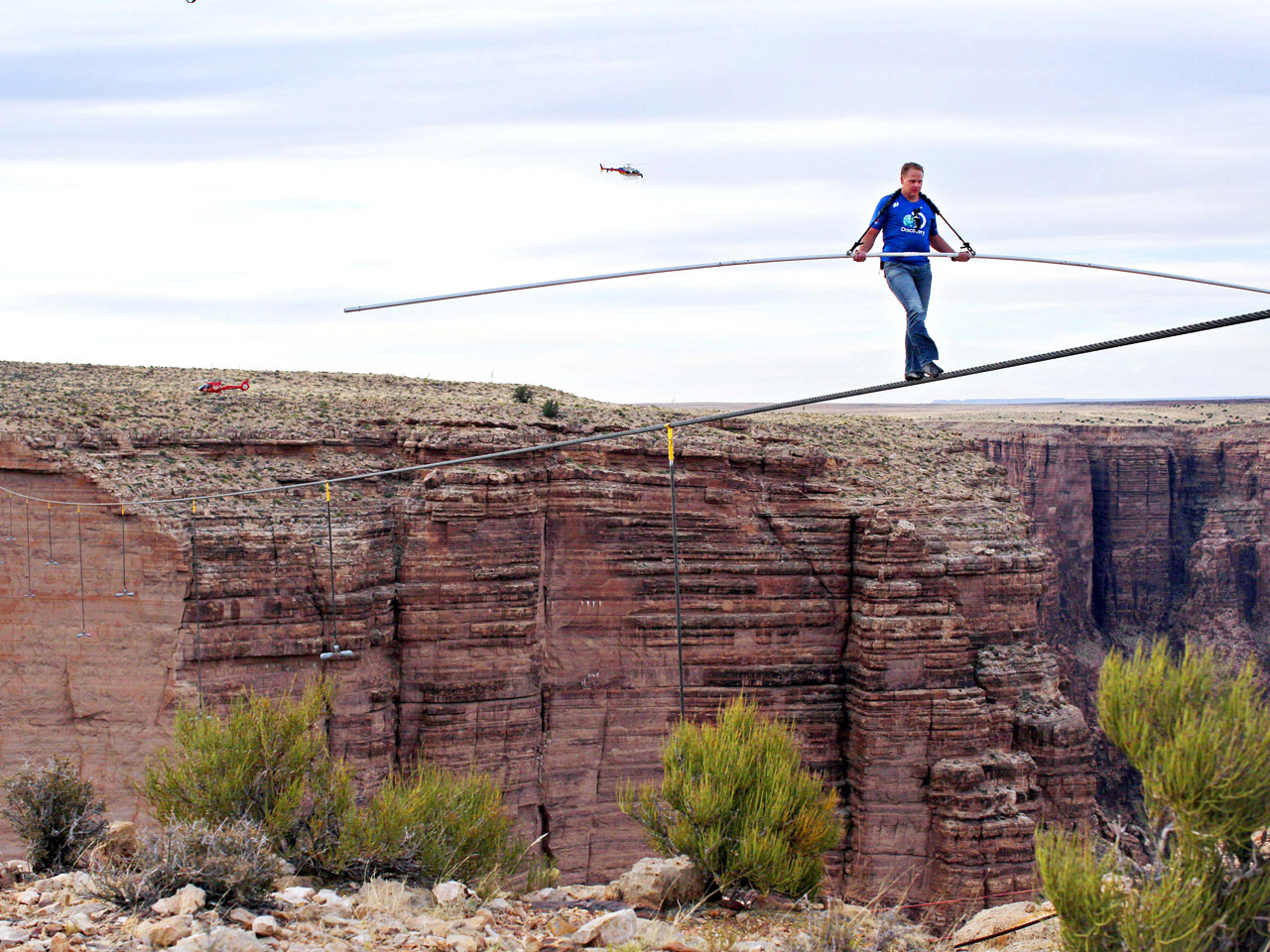 Wallenda performed the stunt on a 2-inch-thick steel cable, 1,500 feet above the river on the Navajo Nation near the Grand Canyon. He took just more than 22 minutes, pausing and crouching twice as winds whipped around him and the rope swayed.

"Thank you Lord. Thank you for calming that cable, God," he said about 13 minutes into the walk.

Wallenda didn't wear a harness and stepped slowly and steady throughout, murmuring prayers to Jesus almost constantly along the way. He jogged and hopped the last few steps.

The event was broadcast live on the Discovery Channel.

Winds blowing across the gorge had been expected to be around 30 mph. Wallenda told Discovery after the walk that the winds were at times "unpredictable" and that dust had accumulated on his contact lenses.

"It was way more windy, and it took every bit of me to stay focused the entire time," he said.

The 34-year-old Sarasota, Fla., resident is a seventh-generation high-wire artist and is part of the famous "Flying Wallendas" circus family — a clan that is no stranger to death-defying feats.

His great-grandfather, Karl Wallenda, fell during a performance in Puerto Rico and died at the age of 73. Several other family members, including a cousin and an uncle, have perished while performing wire walking stunts.

Nik Wallenda grew up performing with his family and has dreamed of crossing the Grand Canyon since he was a teenager. Sunday's stunt comes a year after he traversed Niagara Falls earning a seventh Guinness world record.

Wallenda wore a microphone and two cameras, one that looked down on the dry Little Colorado River bed and one that faced straight ahead. His leather shoes with an elk-skin sole helped him keep a grip on the steel cable as he moved across.

About 600 spectators watching on a large video screen on site cheered him on as he walked toward them. A Navajo Nation ranger, a paramedic and two members of a film crew were stationed on the canyon floor and watched from below.

The ranger, Elmer Phillips, said Wallenda appeared to be walking like any normal person would on a sidewalk. But he said he got a little nervous when Wallenda stopped the first time.

"Other than that, a pretty amazing feat. I know I wouldn't even attempt something like that," Phillips said. "Very nicely done."

Before the walk, a group of Navajos, Hopis and other Native Americans stood along a nearby highway with signs protesting the event.

The event was touted as a walk across the Grand Canyon, an area held sacred by many American Indian tribes. Some local residents believe Wallenda hasn't accurately pinpointed the location and also said that the Navajo Nation shouldn't be promoting the gambling of one man's life for the benefit of tourism.

"When people watch this, our main thing is we want the world to know who Navajo people are, our culture, traditions and language are still very much alive," Geri Hongeva, spokeswoman for the tribe's Division of Natural Resources, said before the walk.