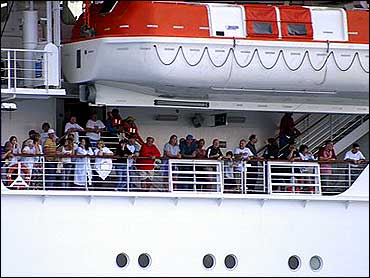 Fire broke out aboard a giant cruise ship Thursday as it sailed through the moonlit Caribbean, killing a passenger, injuring 11 other people and scorching about 100 rooms.

The Jamaica Hotel and Tourist Association, who toured the ship after it docked here.

Passengers grabbed life jackets and raced to "muster stations" after the blaze started about 3 a.m., said Julie Benson, spokeswoman for Princess Cruises, which is owned by Miami-based Carnival Corp. The crew put out the fire, then did a cabin-by-cabin search to check for victims and make sure everyone else was safe, she said.

Richard Liffidge, 75, of the U.S. state of Georgia, collapsed and died on deck, said Karl Angell, communications director for the Jamaican police. The victim's wife was taken to a hospital in Montego Bay, Angell said.

Benson said about 100 cabins were affected by the fire, though Peterkin put the number at around 150.

Benson said the company has reached no conclusions about the cause of the blaze.

The Star Princess was sailing from Grand Cayman to Jamaica when the blaze started. Reportedly built at a cost of more than $430 million, it has four swimming pools, a half-dozen restaurants and dining rooms, a casino, two theaters, and several nightclubs. It stretches about three football fields long.

Zach Bramlage, 19, of Columbus, Ohio, was having a late-night meal when word spread that there was a fire.

"Some people just ran in where we were eating and told us the ship is on fire and we got our life vests real quick and headed downstairs," Bramlage said. "I was pretty scared initially but the captain came over the (intercom) and told us everything was going to be all right."

Carolyn Spencer Brown, editor of the consumer cruise information web site cruisecritic.com, said in a telephone interview that she was surprised the number of casualties was not greater.

"There they were at sea in the middle of the night," she said from Lambertville, New Jersey. "What really struck me when seeing the damage was — how could only one person die in something so bad?"

Benson said the passenger died after suffering cardiac arrest. But Peterkin said an autopsy would be performed to determine the cause of death.

Hours after the ship arrived in Montego Bay before noon, passengers boarded buses that took them to hotels in the nearby resort towns of Negril and Ocho Rios. Other passengers remained on board the ship.

The U.S. Coast Guard dispatched investigators and fire engineers to help determine the fire's cause and whether the ship was seaworthy, Coast Guard Petty Officer James Judge said in Miami. Teams were expected to arrive Thursday afternoon.

The ship wasn't seriously damaged and would sail back to Fort Lauderdale, Fla., on Friday, Peterkin said. The Star Princess sailed from Fort Lauderdale on March 19.

The fire comes a day after a bus carrying cruise ship passengers plunged off a highway in northern Chile and tumbled 300 feet down a mountainside, killing 12 Americans.