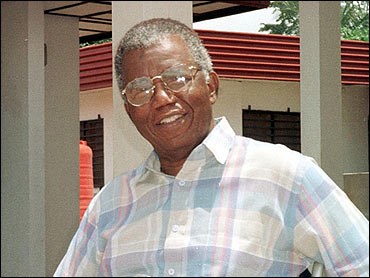 Best known for his first novel, "Things Fall Apart" (1958), and "Anthills of the Savannah," published more than 30 years later, Achebe has written more than 20 books, including novels, short stories, essays and collections of poetry.

"Chinua Achebe's early work made him the father of modern African literature as an integral part of world literature," said Nobel laureate Nadine Gordimer, one of the three judges for the award.

"In 'Things Fall Apart' and his other fiction set in Nigeria, Chinua Achebe inaugurated the modern African novel," said another judge, academic Elaine Showalter. "He also illuminated the path for writers around the world seeking new words and forms for new realities and societies. We honor his literary example and achievements."

Achebe's work centers on African politics, the way Africa and Africans are depicted in the West and the effects of colonization on African societies.

In all, 15 writers from Canada, Britain, the United States, Australia, Ireland, France, Israel, Mexico, Nigeria and the Netherlands were shortlisted for the 2007 Man Booker International Prize for fiction award.

Launched in 2004 as a spin-off from Britain's prestigious Booker Prize, the international trophy is awarded every two years to a living author who has published fiction in English or whose work has been translated into English.

Achebe, who will receive the prize June 28 at a ceremony in Oxford, began work with the Nigerian Broadcasting Co. in Lagos in 1954 and studied broadcasting at the British Broadcasting Corp. in London.

During Nigeria's 1967-1970 civil war, Achebe's Ibo people of the eastern region tried to establish an independent Republic of Biafra, and Achebe tried publicize the plight of his people.

Achebe is currently professor of languages and literature at Bard College, New York, and has lectured in universities around the world. In 2004, he refused to accept Nigeria's second highest honor, the Commander of the Federal Republic, to protest the state of affairs in his native country. Nigeria held a presidential election in April that marked the first time one elected leader handed over power to another in a country plagued by military rule and dictators since gaining independence from Britain in 1960.

Achebe, who was paralyzed from the waist down after a 1990 car accident, is married with four children.

"Things Fall Apart" has sold more than 10 million copies around the world and has been translated into 50 languages, making Achebe the most translated African writer of all time. Many African writers, including Chimamanda Ngozi Adichie, who won the Orange Prize for Fiction last week for "Half of a Yellow Sun," have said they were inspired by his work.