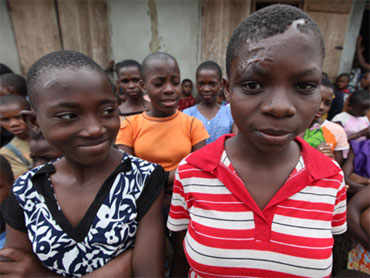 The nine-year-old boy lay on a bloodstained hospital sheet crawling with ants, staring blindly at the wall.

His family pastor had accused him of being a witch, and his father then tried to force acid down his throat as an exorcism. It spilled as he struggled, burning away his face and eyes. The emaciated boy barely had strength left to whisper the name of the church that had denounced him - Mount Zion Lighthouse.

A month later, he died.

Nwanaokwo Edet was one of an increasing number of children in Africa accused of witchcraft by pastors and then tortured or killed, often by family members. Pastors were involved in half of 200 cases of "witch children" reviewed by the AP, and 13 churches were named in the case files.

Some of the churches involved are renegade local branches of international franchises. Their parishioners take literally the Biblical exhortation, "Thou shalt not suffer a witch to live."

"It is an outrage what they are allowing to take place in the name of Christianity," said Gary Foxcroft, head of nonprofit Stepping Stones Nigeria.

For their part, the families are often extremely poor, and sometimes even relieved to have one less mouth to feed. Poverty, conflict and poor education lay the foundation for accusations, which are then triggered by the death of a relative, the loss of a job or the denunciation of a pastor on the make, said Martin Dawes, a spokesman for the United Nations Children's Fund.

"When communities come under pressure, they look for scapegoats," he said. "It plays into traditional beliefs that someone is responsible for a negative change ... and children are defenseless."

The idea of witchcraft is hardly new, but it has taken on new life recently, partly because of a rapid growth in evangelical Christianity. Campaigners against the practice say around 15,000 children have been accused in two of Nigeria's 36 states over the past decade and around 1,000 have been murdered. In the past month alone, three Nigerian children accused of witchcraft were killed and another three were set on fire. 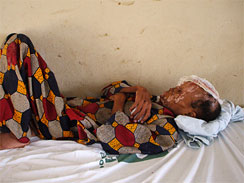 (AP Photo/Sunday Alamba)
Nigeria is one of the heartlands of abuse, but hardly the only one: the United Nations Children's Fund says tens of thousands of children have been targeted throughout Africa.

(Left: This Aug. 18, 2009 photo in a Akwa Ibom hospital shows Nwanaokwo Edet, 9, whose father forced him to drink acid after the family's pastor denounced the child as a witch. He died from his injuries one month later.)

Church signs sprout around every twist of the road snaking through the jungle between Uyo, the capital of the southern Akwa Ibom state where Nwanaokwo lay, and Eket, home to many more rejected "witch children." Churches outnumber schools, clinics and banks put together. Many promise to solve parishioner's material worries as well as spiritual ones - eight out of ten Nigerians struggle by on less than $2 a day.

"Poverty must catch fire," insists the Born 2 Rule Crusade on one of Uyo's main streets.

"Where little shots become big shots in a short time," promises the Winner's Chapel down the road.

"Pray your way to riches," advises Embassy of Christ a few blocks away.

It's hard for churches to carve out a congregation with so much competition. So some pastors establish their credentials by accusing children of witchcraft.

Nwanaokwo said he knew the pastor who accused him only as Pastor King. Mount Zion Lighthouse in Nigeria at first confirmed that a Pastor King worked for them, then denied that they knew any such person.

Bishop A.D. Ayakndue, the head of the church in Nigeria, said pastors were encouraged to pray about witchcraft, but not to abuse children.

"We pray over that problem (of witchcraft) very powerfully," he said. "But we can never hurt a child."

The Nigerian church is a branch of a Californian church by the same name. But the California church says it lost touch with its Nigerian offshoots several years ago.

"I had no idea," said church elder Carrie King by phone from Tracy, Calif. "I knew people believed in witchcraft over there but we believe in the power of prayer, not physically harming people."

The Mount Zion Lighthouse - also named by three other families as the accuser of their children - is part of the powerful Pentecostal Fellowship of Nigeria. The Fellowship's president, Ayo Oritsejafor, said the Fellowship was the fastest-growing religious group in Nigeria, with more than 30 million members.

"We have grown so much in the past few years we cannot keep an eye on everybody," he explained.

But Foxcroft, the head of Stepping Stones, said if the organization was able to collect membership fees, it could also police its members better. He had already written to the organization twice to alert it to the abuse, he said. He suggested the fellowship ask members to sign forms denouncing abuse or hold meetings to educate pastors about the new child rights law in the state of Akwa Ibom, which makes it illegal to denounce children as witches. Similar laws and education were needed in other states, he said.

Sam Itauma of the Children's Rights and Rehabilitation Network said it is the most vulnerable children - the orphaned, sick, disabled or poor - who are most often denounced. In Nwanaokwo's case, his poor father and dead mother made him an easy target.

"Even churches who didn't use to 'find' child witches are being forced into it by the competition," said Itauma. "They are seen as spiritually powerful because they can detect witchcraft and the parents may even pay them money for an exorcism."

That's what Margaret Eyekang did when her 8-year-old daughter Abigail was accused by a "prophet" from the Apostolic Church, because the girl liked to sleep outside on hot nights - interpreted as meaning she might be flying off to join a coven. A series of exorcisms cost Eyekang eight months' wages, or US$270. The payments bankrupted her.

"They beat her with sticks and asked me why I was bringing them a witch child," she said. A relative offered Eyekang floor space but Abigail was not welcome and had to sleep in the streets.

Members of two other families said pastors from the Apostolic Church had accused their children of witchcraft, but asked not to be named for fear of retaliation.

The Nigeria Apostolic Church refused repeated requests made by phone, e-mail and in person for comment.

At first glance, there's nothing unusual about the laughing, grubby kids playing hopscotch or reading from a tattered Dick and Jane book by the graffiti-scrawled cinderblock house. But this is where children like Abigail end up after being labeled witches by churches and abandoned or tortured by their families.

There's a scar above Jane's shy smile: her mother tried to saw off the top of her skull after a pastor denounced her and repeated exorcisms costing a total of $60 didn't cure her of witchcraft. Mary, 15, is just beginning to think about boys and how they will look at the scar tissue on her face caused when her mother doused her in caustic soda. Twelve-year-old Rachel dreamed of being a banker but instead was chained up by her pastor, starved and beaten with sticks repeatedly; her uncle paid him $60 for the exorcism.

Israel's cousin tried to bury him alive, Nwaekwa's father drove a nail through her head, and sweet-tempered Jerry - all knees, elbows and toothy grin - was beaten by his pastor, starved, made to eat cement and then set on fire by his father as his pastor's wife cheered it on.

The children at the home run by Itauma's organization have been mutilated as casually as the praying mantises they play with. Home officials asked for the children's last names not to be used to protect them from retaliation.

The home was founded in 2003 with seven children; it now has 120 to 200 at any given time as children are reconciled with their families and new victims arrive.

Helen Ukpabio is one of the few evangelists publicly linked to the denunciation of child witches. She heads the enormous Liberty Gospel church in Calabar, where Nwanaokwo used to live. Ukpabio makes and distributes popular books and DVDs on witchcraft; in one film, a group of child witches pull out a man's eyeballs. In another book, she advises that 60 percent of the inability to bear children is caused by witchcraft.

In an interview with the AP, Ukpabio is accompanied by her lawyer, church officials and personal film crew.

"Witchcraft is real," Ukpabio insisted, before denouncing the physical abuse of children. Ukpabio says she performs non-abusive exorcisms for free and was not aware of or responsible for any misinterpretation of her materials.

"I don't know about that," she declared.

However, she then acknowledged that she had seen a pastor from the Apostolic Church break a girl's jaw during an exorcism. Ukpabio said she prayed over her that night and cast out the demon. She did not respond to questions on whether she took the girl to hospital or complained about the injury to church authorities.

After activists publicly identified Liberty Gospel as denouncing "child witches," armed police arrived at Itauma's home accompanied by a church lawyer. Three children were injured in the fracas. Itauma asked that other churches identified by children not be named to protect their victims.

"We cannot afford to make enemies of all the churches around here," he said. "But we know the vast majority of them are involved in the abuse even if their headquarters aren't aware."

Just mentioning the name of a church is enough to frighten a group of bubbly children at the home.

"Please stop the pastors who hurt us," said Jerry quietly, touching the scars on his face. "I believe in God and God knows I am not a witch."
By Associated Press Writer Katharine Houreld; AP researcher Rhonda Shafner in New York contributed to this report