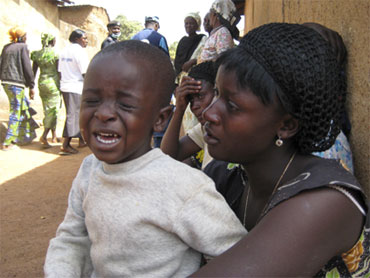 The killers showed no mercy: They didn't spare women and children, or even a 4-day-old baby, from their machetes. Nigerian women wailed in the streets as a dump truck carried dozens of bodies past burned-out homes toward a mass grave.

Rubber-gloved workers pulled ever-smaller bodies from the dump truck and tossed them into the mass grave on Monday. A crowd began singing a hymn with the refrain, "Jesus said I am the way to heaven." As the grave filled, the grieving crowd sang: "Jesus, show me the way."

At least 200 people, most of them Christians, were slaughtered on Sunday, according to residents, aid groups and journalists. The local government gave a figure more than twice that amount, but offered no casualty list or other information to substantiate it.

An Associated Press reporter counted 61 corpses, 32 of them children, being buried in the mass grave in the village of Dogo Nahawa on Monday. Other victims would be buried elsewhere. At a local morgue the bodies of children, including a diaper-clad toddler, were tangled together. One appeared to have been scalped. Others had severed hands and feet.

The horrific violence comes after sectarian killings in this region in January left more than 300 dead, most of them Muslims. Some victims were shoved into sewer pits and communal wells.

The U.S. government and an international human rights group called Tuesday on Nigeria to properly investigate and prosecute those responsible for the weekend slaughter.

Human Rights Watch said Acting President Goodluck Jonathan also must provide police and military protection for those around the city of Jos in central Nigeria.

The U.S. Embassy in Abuja, Nigeria's capital, said an investigation and prosecution would show all Nigerians that "they are respected and protected."

Nigeria is almost evenly split between Muslims in the north and the predominantly Christian south. The recent bloodshed has been happening in central Nigeria, in towns which lie along the country's religious fault line. It is Nigeria's "middle belt," where dozens of ethnic groups vie for control of fertile lands.

The Rev. Pandang Yamsat, the president of a local Christian group, said he has urged his congregation not to respond violently to Muslims. However, he said he believes Muslims in the area want to control the region and that any peace talks would only give Muslims "time to conquer territory with swords."

"We have done our best to tell our members, 'don't go and attack Muslims, they are your brother,"' Yamsat said. However, "'if they come to dislodge you in your place, stand to defend yourself."'

Barely controlled rage spilled over in the village as those gathered for the mass burial attacked a Muslim journalist covering the event. The journalist escaped, but others made threats against reporters.

The Rev. Federico Lombardi, a Vatican spokesman, condemned the violence and said Monday that the conflict must be interpreted in the light of social, economic, ethnic and cultural factors rather than religious hatred.

The killings add to the tally of thousands who have already perished in Africa's most populous country in the last decade due to religious and political frictions. Rioting in September 2001 killed more than 1,000 people. Muslim-Christian battles killed up to 700 people in 2004. More than 300 residents died during a similar uprising in 2008.

Chuwanga Gyang, 30, said he heard a gunshot and left his house through the back door but stopped when he realized that the attackers were shooting to herd fleeing villagers toward another group of attackers carrying machetes.

He recalled climbing into a tree and watching as villagers were killed and the attackers set homes alight over the course of 90 minutes.

The attackers asked people "Who are you?" in Fulani, a language used mostly by Muslims, and killed those who did not answer back in Fulani, he said.

Plateau State spokesman Gregory Yenlong said police are seeking to arrest Saleh Bayari, the regional leader of the Fulanis, alleging Bayari had made comments that incited the slaughter. He gave no details.

The chairman of the local Fulani organization denied that his people were involved in the violence.

Jos has been under a dusk-til-dawn curfew enforced by the military since January's religious-based violence. It was not clear how the attackers managed to elude the military curfew early Sunday.

"We have seen our flock is becoming very restive as the government is not trying to protect them," he said, warning that Christians would fight back if attacked again.

Acting President Jonathan had said security agencies would be stationed along Plateau state's borders to keep outsiders from coming in with more weapons and fighters. However, an AP reporter passed into the state without being stopped and searched, as soldiers armed with Kalashnikovs merely watched passing traffic from the shade of trees and buildings.

More than 600 people have fled to a makeshift camp that still held victims from January's violence, said Red Cross official Adamu Abubakar. He expected more to come, putting an even bigger strain on the already limited humanitarian aid for those fleeing the violence.