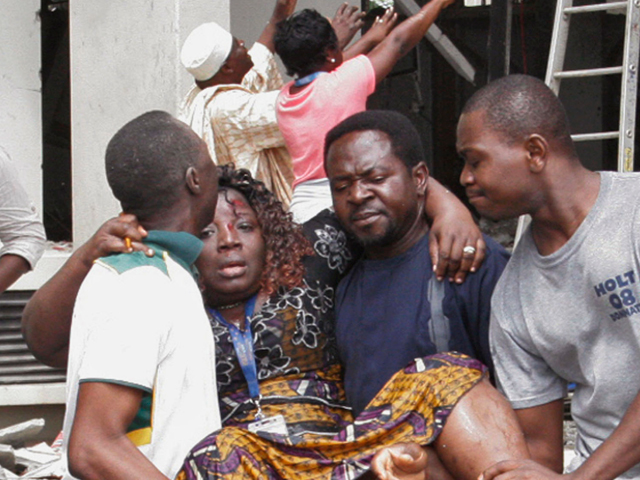 LAGOS, Nigeria - A member of a radical Muslim sect with "al Qaeda links" helped mastermind the bombing of the United Nations headquarters in Nigeria's capital, the nation's secret police said Wednesday, a worrying sign international terror groups may be seeking a foothold in the oil-rich country.

The State Security Service issued a statement to journalists Wednesday saying it also arrested two other men suspected of planning the attack six days before the bomb tore through the Abuja headquarters of the world body, killing 23 people and wounding 81. The attack raised new questions about Nigeria's ability to fight terrorism as the radical Boko Haram sect stages increasingly bloody sectarian attacks against the nation's weak central government.

The secret police said it received information Aug. 18 that an attack in the capital would come from Boko Haram, a group that campaigns for the implementation of strict Shariah law across the country. On Aug. 21, officers arrested Babagana Ismail Kwaljima and Babagan Mali, two men the agency said had ties to Boko Haram and were planning the attack.

"The suspects have made valuable statements and are being held at a military facility," the agency's statement read.

"Investigation has revealed that one Mamman Nur, a notorious Boko Haram element with al Qaeda links who returned recently from Somalia, (worked) in concert with the two suspects (in) masterminding the attack on the United Nations building in Abuja," the agency said.

The agency statement, the first confirmation from Nigeria's government of Boko Haram's involvement, also implicates transnational terrorism in the bombing after warnings from others that the sect had reached out to other terror groups. Earlier this month, the commander for U.S. military operations in Africa told The Associated Press that Boko Haram may be trying to coordinate attacks with al-Shabab in Somalia and al Qaeda in the Islamic Maghreb, which operates in northwest Africa.

Nigeria, a nation of 150 million people, is split largely between a Christian south and a Muslim north. Unemployment and unceasing poverty, coming despite the nation making billions a year from oil production, have fueled resentment in recent years in the north.

The country remains vital to U.S. oil supplies, but the crude rests in the nation's southern delta, far from the current violence. However, Friday's attack shows a new level of sophistication by Boko Haram and a willingness to target foreigners.

However, it remains unclear who Boko Haram is or what they particularly seek from their wave of violence. Initially, sect members followed the orders of Mohammed Yusuf, who rejected Western science and other teachings. Yusuf died in 2009 in police custody, after a riot and security crackdown left 700 dead in the northeast city of Maiduguri.

Now, analysts and diplomats say it appears Boko Haram has splintered, with some members remaining focused on domestic issues and another branch increasingly persuaded to use violence for their attacks. The contacts al-Shabab and the northern African al Qaeda branch have made with Boko Haram likely come through that point.

Al Qaeda in the Islamic Maghreb also has issued statements on Boko Haram's behalf and said it gave the group weapons, while a diplomat recently told the AP that 19 Nigerians — including suspected Boko Haram members — traveled to rebel-held areas Somalia in 2010.

Moderate Muslims remain horrified at the bombings in the country. The spiritual leader of the nation's Muslims, the Sultan of Sokoto Muhammad Sa'ad Abubakar III, condemned the bombings in a message Wednesday marking the end of Ramadan

"We should not allow our enemies to cause us to commit acts prohibited by our religion and the perpetrators should desist from such acts and rather seek for avenues of dialogue with the leaders on the problems confronting the nation," Abubakar said.

But the secret police statement also raised concerns about its ability to protect the nation. The agency did not say if it shared any of the intelligence with diplomats in Abuja. The security chief for the U.N. previously said it received no specific warning about a coming attack.

Marilyn Ogar, a spokeswoman for the secret police, declined to comment when asked why the agency couldn't stop the bombing or whether it shared its information with others.