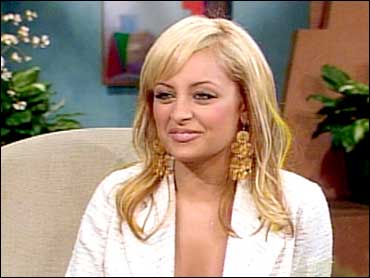 As the daughter of Grammy award winning musician Loniel Richie, Nicole Richie is no stranger to fame.

But last year, she and her best friend, Paris Hilton, took it to a new level when they spent a season tending a farm in Arkansas for the reality show, "The Simple Life." This time out, Nicole and Paris hit the road on a cross-country tour. And, in one of their more revealing pit stops, they meet a few members of a local nudist colony.

"We had no idea we were in a nudist colony until we got there," Richie tells The Early Show co-anchor Rene Syler. "An older man, fully clothed, said you're in a nudist colony. It's called Caliente, which means hot. I thought we were going to be around hot salsa dancers or something. We get there and it's all, like, people. It's just all out there. And you try to get your eyes not to wander down, but it happens, you know. It's so weird."

The premise of the show, Richie explains, is to travel with Hilton from Miami to L.A. stopping in little towns along the way. The problem? "We have no money, no credit cards, no cell phone," she says. "And we have to get jobs to make money. The money, we could only use it for, like, gas and fast food, because we made no money and had to get our way back to L.A."

So at the Caliente resort, they were hired as maids. In one of the first scenes, Richie and Hilton are seen cleaning someone's suite.

"I've never cleaned a toilet before," Richie says. "If it was my toilet, that's understandable. But to clean somebody else's toilet and there was pee all over the seat."

But not all was that bad. They participated in a body acceptance class, where Richie says she realized her knees are very sexy.

"As long as you keep saying that you love your body and love yourself, everyone claps around you," she explains.

While they wore clothes to perform their jobs, Richie does say she cut her maid's dress: "They were really long. They were down to our knees."

Did she ever think of baring all herself?"No, no, absolutely not, no," she says and even notes she was in shock the first 10 to 20 minutes she had to interact with the nude people.

"At the end, we actually go to their nightclub in their resort, and it's all of these naked people and their dancing with everything just out there and everything's bouncing around."

As for her relationship with Hilton, she says they get along great. "She's my best friend. Our one disagreement is she likes the air on at night and I like the heat on at night. And so the first season, I slept with the heater on, next to my side of the bed and she slept with a fan next to her side. [This season,] we didn't that have that luxury, because we were in an Air-stream. But fortunately, we didn't have the air or the heat working. It was freezing, but there were so many bodies in the bed between us two and our two dogs that I kept warm anyway."

Richie says she has an album coming out. "A mixture of rock and soul," she says. "I play the piano, violin and cello."