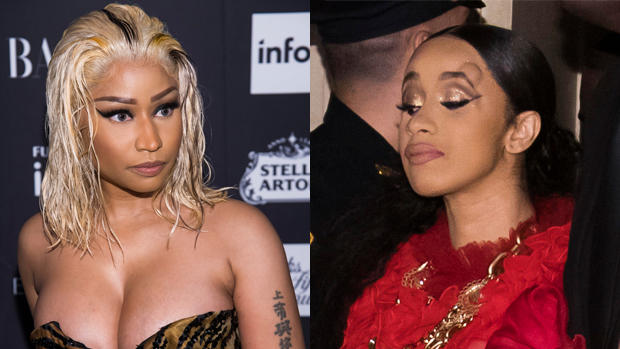 Nicki Minaj has broken her silence on her scuffle with Cardi B at the Harper's Bazaar Icons party in New York on Friday that left the latter with a welt on her head. She addressed the drama on her Beats 1 "Queen Radio" show on Monday, calling it "mortifying and humiliating."

An anonymous source told The Associated Press that Minaj was finishing up a conversation with someone when Cardi B tried to attack her, but Minaj's security guards intervened. Cardi B reportedly threw her shoe at Minaj.

Cardi B reportedly tried to attack Minaj because she thought the "Chun-Li" rapper had made fun of her daughter.

Minaj also said it was especially embarrassing that the fight took place in front of "upper echelon people who have their lives together." The rapper, whose real name is Onika Tanya Maraj, said, "It's crazy for me that people always need to make Onika the bad guy … I could not believe how humiliating it all felt — how we made ourselves look."

She also said of Cardi B, "This is not funny. Get this woman some f**king help. This woman's at the highest point in her career and she's throwing shoes?"

Video on social media showed Cardi B lunging at someone. She was seen leaving the party without shoes.

In a subsequent Instagram post, Cardi B appeared to talk about the fight and said that the person she attacked had spoken ill of her in the past. She said that she only decided to fight once she heard that the person also slammed her parenting skills.