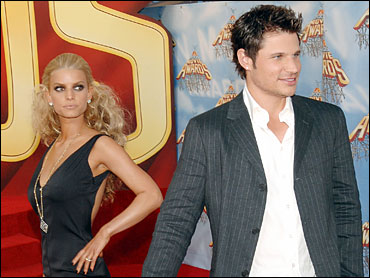 In divorce papers, Nick Lachey is seeking spousal support from Jessica Simpson, and he wants his jewelry back.

In court papers filed Friday in response to Simpson's Dec. 16 divorce filing, Lachey cited irreconcilable differences for the dissolution of the three-year marriage.

Lachey, 32, also asked for "miscellaneous jewelry and other personal effects," part of Simpson's earnings from after the date of separation and other assets.

Lachey said he and Simpson separated Dec. 13, although she claims it was Nov. 23.

The couple, who starred in their own MTV reality show, "Newlyweds: Nick & Jessica," had no prenuptial agreement and in her petition, Simpson asked the court not to grant Lachey spousal support.

Lachey, who gained fame as a member of the boy band 98 Degrees, had more earning power when the couple wed in October 2002. However, Simpson's fame skyrocketed during the marriage. The 25-year-old singer-actress reportedly earned more than $30 million last year, including earnings from her big-screen debut playing Daisy Duke in "The Dukes of Hazzard" movie.

Last month, the Mediterranean-style house the pair shared during "Newlyweds" was sold to "Malcolm in the Middle" teen actor Justin Berfield for an undisclosed price.