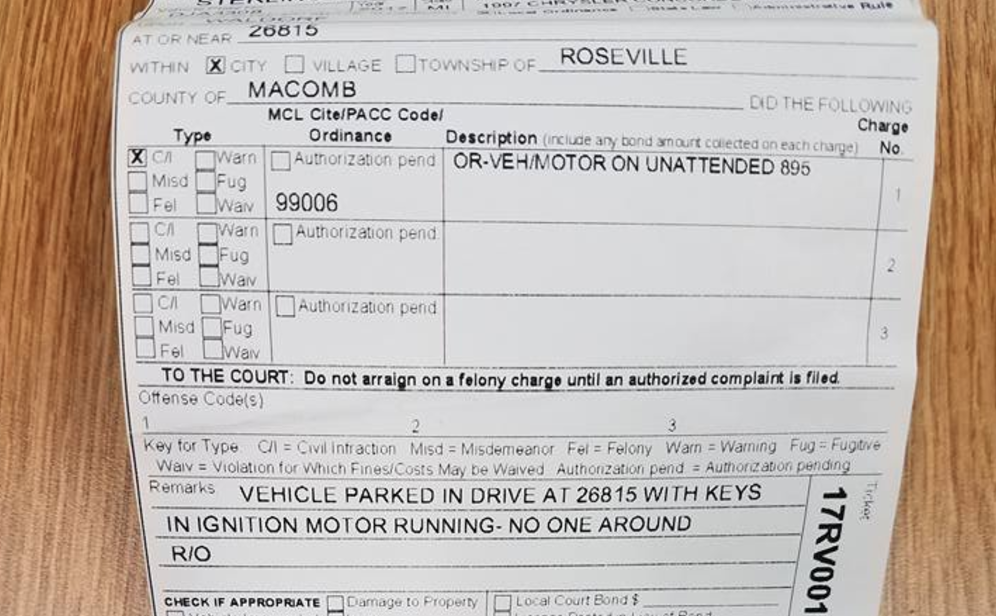 On a cold Michigan morning, Nick Taylor drove to his girlfriend’s house to pick her and her 2-year-old son up.

Like many residents do in the middle of winter, Taylor left his car unlocked and running in the driveway, hoping it would warm up by the time he returned.

But when the 24-year-old walked back to his frosted car, he spotted a piece of paper tucked underneath his windshield: it was a $128 ticket for leaving a vehicle unattended.

“I was there for maybe seven or eight minutes before I noticed the ticket,” Taylor told CBS Detroit, adding that he was dropping off diapers in the process.

Afterward, Taylor posted a photo of the ticket on his Facebook page, blasting the city of Roseville, Michigan, for “wasting the taxpayer’s money.”

The image was shared by more than 13,600 people and received thousands of comments, sparking a debate on whether or not the ticket was valid.

“I thought u couldn’t be ticketed on private property,” one Facebook user argued.

“Unreal! I wonder what lesson was being taught with this ticket,” another commented.

“What about auto start?” others asked.

Despite the dozens of questions raised about the ticket, local law enforcement said they’re standing by it.

“I encourage our officers to write this ticket,” Roseville Police Chief James Berlin told CBS Detroit, citing car theft as public safety concern. “All it takes is someone to hop in this car and take off. Then there’s a chase often at a high rate of speed and all that could have been prevented.”

Berlin said a remote started includes safeguards against theft, pointing out that Taylor’s vehicle was left unattended with the keys in the ignition.

Whether Taylor’s Facebook post went viral or not, the man will have to wait to argue his case in court.