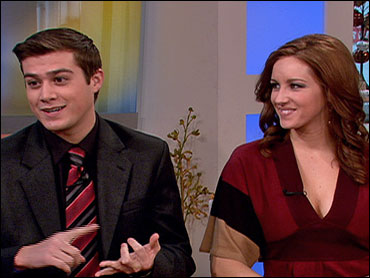 It's been an "Amazing Race" indeed for Nick and Starr Spangler.

The brother-and-sister team took first place and the reality show's $1 million top prize in the finale, which aired Sunday on CBS.

"I don't think I could race with anyone else other than Nick," Starr told Early Show co-anchor Harry Smith Monday. "We just were a great balance for each other. You've gotta have a teammate that you can do that push-and-pull with. It's exhausting, and any racer will tell you, at the end of it, you're ready to go home and call it a day."

"Honestly, you just -- it has to be Kismet for the team that wins," Nick observed to Smith. "You just have to have the right balance of, you know, luck, strength, mental ability, and it all came together for us."

"When we were in that cab going to the finish line," Starr added, "we had a pretty good idea that we were in first place and it was amazing just to make it all the way through the race."

"Funny, watching it back," Nick continued. "We just hugged each other and we couldn't believe it."

The duo charged through the last leg of the global race in Portland, Ore. They balanced on a beam high in the air, descended a zip line from 2,000 feet, and solved a complex puzzle.

They then searched throughout the city for clues to where the finish line was, before frantically hailing a taxi to it.

After crossing it, the siblings hugged. Starr told her brother: "You're my best friend. I love you."

Nick, 22, said he was proud of his sister, who is a year younger.

"She's been unbelievable on this race," he said. "More than $1 million, more than being the winners of 'The Amazing Race,' I love the experience that I've gone through with my sister, and I've loved seeing her succeed so greatly."

A married-but-separated couple, Ken and Tina Greene, finished a close second. They cried as they put their wedding rings back on.

"Let's start this thing over again, and we'll do it right this time," said Ken Greene, a former pro football player.

"The race, we knew going in wud either make or break our relaitonship," Greene remarked to Smith. "And we felt like it fortified it. And we had our moments! Not just one. We had several. ... It bonded us, made us stronger togetehr."

In the 13th season of "The Amazing Race," contestants logged nearly 40,000 miles on a trip that took them through Brazil, Bolivia, New Zealand, Cambodia, India, Kazakhstan and Russia.