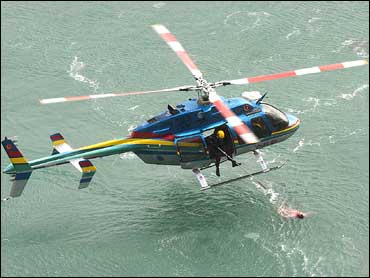 A man jumped into Niagara Falls on Wednesday and survived the 180-foot plunge, then resisted rescue attempts before he eventually was pulled from the icy water to safety, police said.

The man, believed to be in his late 30s, was semiconscious when he was taken to a hospital. He lapsed into unconsciousness and is now at Greater Niagara General Hospital with severe hypothermia, reports CBS News correspondent George Richert.

Only three people have survived that kind of Niagara plunge in history, Richert reports.

He said the man was suffering from hypothermia and a head injury. Police were unable to get any information from the man because of the affects of the near-freezing water.

A witness called police shortly and told them a man had climbed over a retaining wall and jumped into the rapids above the Horseshoe Falls, one of Niagara Falls' three waterfalls. A short time later, the man was seen near the base of the falls.

Specially trained falls rescue crews tried to assist the man, but he swam away from them toward the middle of the river, Kane said.

"He wasn't cooperative," pilot Ruedi Hafen, owner of Niagara Falls Helicopter, told The Associated Press. "He didn't try to be helpful. We had a sling on him and he got out of it."

Rescue crews said the man was in the water for about 45 minutes and spent much of that time resisting attempts to help him.

Firefighter Todd Brunning and another rescue worker swam about 60 yards (meters) from shore, grabbed hold of him and hauled him in, Niagara Fire Capt. David Belme said.

Brunning said the man was floating on his back and got caught in an eddy, allowing Brunning to swim up behind him and wrap his arms around his chest.

"I was surprised he was still conscious when we got to him," Brunning said. "I guess he was lucky."

Brunning said the man was responsive to verbal commands but unable to talk.

"He was on a suicide mission, I assume," Hafen said. "I've never, in my career, seen someone so tough, swimming between the ice."

The last person known to survive a plunge over the falls was a Michigan man, Kirk Jones, who climbed down a small embankment and jumped into the Niagara River on Oct. 20, 2003. Jones said he had been depressed and had been drinking.

At least 17 people - not including suicide attempts - are known to have gone over the falls.