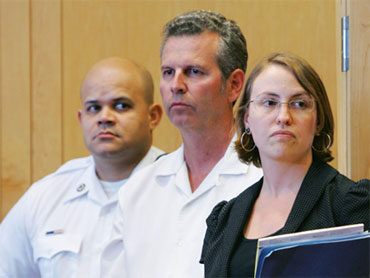 LAWRENCE, Mass. (AP) A veteran sports reporter for New Hampshire's largest newspaper was accused Wednesday of running a prostitution ring in two states and Canada featuring women who had auditioned for him to get the call girl jobs.

Kevin Provencher advertised his prostitution ring's services on Craigslist and other Web sites and rented hotel rooms in Andover, Mass., and in New Hampshire where the women would have sex for money, prosecutors said.

He set up a similar operation in Canada, Essex Assistant District Attorney Michelle Defeo told the New Hampshire Union Leader, the newspaper for which he has worked as a sports writer for more than two decades.

Provencher, 50, was arrested at his Manchester, N.H., home early Wednesday and was taken to Massachusetts, where he pleaded not guilty in Lawrence District Court to two counts of deriving support from prostitution. A judge ordered him held on $10,000 cash bail.

Defeo said Provencher hired two women after setting up a web site for an escort service.

According to the Union Leader, Provencher met the women at a Manchester hotel to "audition" them. He was accused of giving one woman lingerie, having sex with her and then telling her she was hired, the newspaper reported, based on court documents.

Defeo said Provencher performed background checks on prospective customers to make sure they weren't police officers, then would rent hotel rooms and provide the women with contact information for the clients. At the end of the day, the women would give Provencher half the money they earned or would deposit it an account he set up, Defeo said.

Police, who said they believe the operation started about a year ago, began investigating after management at the Spring Hill Suites hotel in Andover became suspicious and called authorities.

Police said they set up a sting operation at the hotel on June 11 and saw men entering and leaving a room. Defeo said law enforcement authorities "could clearly hear activities consistent with sexual intercourse," the Union Leader reported.

Provencher, 50, has been suspended from the Union Leader, where he has been its primary motor sports reporter since 1990. He also has been the newspaper's beat reporter covering the Manchester Monarchs since the American Hockey League franchise's 2001 inception.

He has won four New Hampshire Sportswriter of the Year awards from the National Sportscasters and Sportswriters Association.

The newspaper's management issued a statement calling Provencher "a valued employee for many years."

"He is innocent until proven guilty," it said. "However, given the nature and seriousness of the charges, he is suspended until further notice."