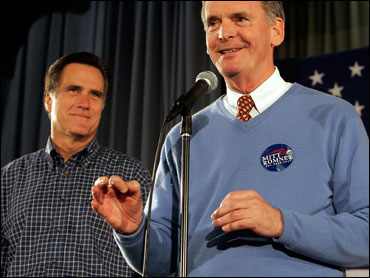 Political Players is a weekly conversation with the leaders, consultants, and activists who shape American politics. This week, CBS News' Brian Goldsmith talked with Sen. Judd Gregg, R-N.H., about his state's early primary, the issues at stake and why he believes Mitt Romney can overcome doubts about his principles and experience.

CBSNews.com: Your endorsement is very coveted in this process. What made you decide to support Governor Romney?

Senator Judd Gregg: Well, basically I was very impressed with the guy. He's a person who's had a tremendous history of doing things and confronting complex problems and getting them solved. And he approaches things from a conservative philosophy. He straightened out the Olympics, and he straightened out Massachusetts. And he's built businesses and created jobs. He's a can-do type of guy.

That's what we need down here. We need somebody to come from outside of Washington, look at some of these problems which folks here in Washington haven't been able to resolve, and get us going towards some solution. And he has a very strong philosophical base, which I like, which is that he approaches things as a fiscal conservative.

Senator Judd Gregg: Well, I think there will be a number of changes. The most obvious is that there will be a stylistic change that's significant. And with the war in Iraq winding down, a new president's going to have more of a clean slate in the area of how we deal with other countries.

He won't be so locked into what has become, unfortunately, an atmosphere where a number of other countries no longer support our position, or have questions about our position. A new president's going to come with a clean slate.

And I think Governor Romney has the ability to continue us down the path of making sure that we follow these terrorists around the world and find them before they can find us, which has basically been the Bush position. But also, hopefully, do it in a way that will sort of reawaken international support for our effort.

CBSNews.com: Romney's fallen to parity with Governor Huckabee, or behind him, in Iowa. And obviously, New Hampshire is just five days later. Can you win New Hampshire if you lose Iowa?

Senator Judd Gregg: Well, I don't know what's happening in Iowa, because I haven't been there. And it's a caucus, remember. A caucus is entirely different than an election. In a caucus, you get a group of people who really believe in you, and you have them show up, and they have to sit there for three, four, five hours. Whereas an election is a very broad participation by a lot of people.

So I think the first primary is really the most important effort. And in New Hampshire, Governor Romney's doing very well. The polls show him in a very strong position. I think that's because his message resonates in New Hampshire. He's a can-do fiscal conservative. That's what people in New Hampshire like.

CBSNews.com: How much of a ricochet effect have you seen over the years? You've watched a lot of these primaries. Do you think that someone who does poorly in Iowa gets hurt in New Hampshire?

Senator Judd Gregg: Interestingly, that has not been the case. If you look at it from a historical perspective, almost the opposite has occurred. You run well in Iowa, and sometimes you have problems in New Hampshire. You run poorly in Iowa, and sometimes you do well in New Hampshire. That's certainly been the historical pattern.

CBSNews.com: I know there's also that two out of three rule, that on the Republican side, since 1980, whoever wins two out of three of Iowa and New Hampshire and South Carolina, always goes on to win the nomination.

Senator Judd Gregg: Up until actually 1992, nobody had ever been elected president without winning in New Hampshire. And then, Clinton, who was perceived to win, but actually lost to Paul Tsongas, was elected president. So that was the first break with that tradition, but New Hampshire's vote is pretty accurate to what ends up happening.

CBSNews.com: You've obviously seen this controversy about Governor Romney employing illegal immigrants to do lawn care at his house in Belmont, Massachusetts. Do you think that that chips away at the credibility of his hard-line immigration message?

There's no way you can really say that he didn't try to act responsibly here. He did. And so, I don't think the people will take that too seriously. It's sort of like saying that a person wanted to be president when they were in kindergarten.

CBSNews.com: The opposing Republican campaigns will say that it goes right to the heart of doubts that some voters have about Romney, which is that he's taken these positions fairly recently that are in line with the views of Republican primary voters, but they don't reflect his personal history or his political history.

Senator Judd Gregg: Well, my view is that Governor Romney's track record is pretty darn strong. And it's very oriented to what I want, which is fiscal conservatism and getting problems solved. And you know, there's a difference here, in my opinion, between the candidates. But on the issue of immigration, there's a fairly significant difference obviously.

CBSNews.com: And on the big issue this week--which is the speech about his Mormon faith--have you noticed that this is an issue among Republican primary voters in New Hampshire?

Senator Judd Gregg: Not at all. And I think it's really an affront to the process that there's this whisper campaign going on in Iowa, I guess. We're not seeing it in New Hampshire.

This is totally inappropriate to the process. The fact that somebody has faith and is committed to very significant personal and moral values, as Mitt Romney is, that's good.

And this attempt to try to discount it in some way and create an atmosphere where maybe this is something out of the norm of American Judeo-Christian tradition is really an ugly way to campaign, in my opinion, and totally inappropriate. And I think the people of New Hampshire reject it out of hand. That's been my impression. Because you just don't hear about it in New Hampshire. Maybe it's playing in Iowa, but it's certainly not playing in New Hampshire.

CBSNews.com: Now, do you hold that view for any person who has a strong religious tradition? For example, if a congressman or senator or governor who is a Muslim were running for president, do you think then, that the particulars of that faith would be irrelevant to the decision of the voters?

Senator Judd Gregg: Well, I hold that view relative to people who I think subscribe to a philosophy of faith which is consistent with the American Judeo-Christian faith. If somebody who's an activist, fundamentalist member of an Islamic church were running for office, obviously there would be issues about whether or not they supported al Qaeda, and whether or not they felt that the purpose of Islam is to overthrow the western world. So I think that's a little different.

No, he does not have the type of foreign policy credentials that somebody like John McCain has. No question about it. But as a practical matter, I think this is a man who's shown that he knows how to deal with complex issues and knows how to deal with people, and can bring people together. And as a result, I think he'll do very well on issues of foreign policy. He understands them very well, and I think he'll exercise a real strong leadership in that area.

Judd Gregg is the senior senator from New Hampshire. Son of a former Republican governor, Gregg is himself a former governor as well as a former member of the House of Representatives. A partner in his own law firm before entering political life, Gregg graduated from Columbia College and Boston University Law School. His Senate service has included a stint as chairman of the Health, Education, Labor, and Pensions Committee, where he helped author the No Child Left Behind law. Gregg has also focused on environmental and budget issues. He is married with three children.