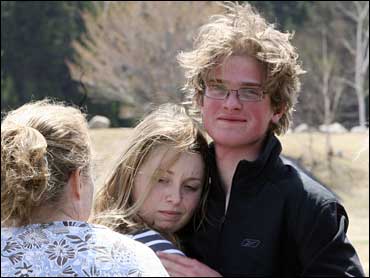 Stranded with a sprained ankle on a snow-covered mountain, Eagle Scout Scott Mason put his survival skills to work by sleeping in the crevice of a boulder and jump-starting evergreen fires with hand sanitizer gel.

He put plastic bags inside his boots to keep his feet dry as he sloshed through mountain runoff hidden beneath waist-deep snow. After three cold days last April, rescue crews spotted him hiking toward the summit of Mount Washington, the Northeast's highest mountain.

New Hampshire officials praised his resourcefulness. So grateful was he for his rescuers that Mason, 17, sent $1,000 to the state.

New Hampshire is one of eight states with laws allowing billing for rescue costs, but only New Hampshire has made frequent attempts to do so — even strengthening its law last year to allow the suspension of hiking, fishing and driver's licenses of those who don't pay, according to an Associated Press review.

National search and rescue organizations insist just the possibility of being billed is dangerous policy. Hikers may delay calling for help while they think about the cost, and that could put them — and the mostly volunteer corps of rescuers — at greater risk.

Other states with laws allowing them to recoup costs rarely, if ever, enforce them, largely for that reason, the AP found.

"If it had happened in Colorado, he would have been applauded for being able to survive for three days," said Paul "Woody" Woodward, president of Colorado's Alpine Rescue Team. "New Hampshire is way out on their own on this one."

New Hampshire officials counter that being properly prepared — not the size of the scout's bill — should be the message about visiting wilderness areas. And, fish and game officials say, many of the state's trailheads are posted with signs warning hikers they may be billed for rescue costs if they aren't properly prepared.

Mason, now an 18-year-high school senior, from Halifax, Mass., has hired a lawyer to try to negotiate a settlement. Officials said he was found to be negligent because he veered off the marked path, was unprepared for melting snow that made a shortcut perilous and went up the mountain with an injured ankle, not down.

The bill included more than $24,000 for a helicopter and labor provided by state fish and game officers. Volunteers provided their time at no charge.

Three states besides New Hampshire — Hawaii, Oregon and Maine — have general laws allowing agencies to bill for rescues. Only Maine has attempted to recoup money a handful of times and the bills were never paid. California, Vermont, Colorado and Idaho have laws allowing state agencies to bill in limited circumstances, but the laws are rarely enforced — and when they are, draw a firestorm of protest from search and rescue groups.

Two years ago, the fire department in Golden, Colo., rescued a hiker from Kansas who had sprained his ankle and later billed him for $5,135. The outcry from national search and rescue groups influenced the city to change its policy and settle with the hiker for 10 percent of the bill.

Only New Hampshire has consistently billed people. Last year, lawmakers increased the likelihood of being billed when they lowered the legal standard from reckless to negligent to make it easier to collect.

Records obtained by The Associated Press from a Freedom of Information Act request found that New Hampshire spent $413,543 on 275 rescue missions over the past two years. The state issued 16 bills for rescues totaling $41,435 — with Mason's $25,000 bill the largest. The state spent far more, $59,426, on a December 2007 search that was not billed. In that case, the body of the 70-year-old hunter was found four months later. His family was not billed.

"We're not going out there with the intent to bill everyone," insists Fish and Game Maj. Timothy Acerno.

Policies vary across the country on penalizing people who ignore weather warnings, don't carry flashlights on long hikes, fail to leave itineraries, ski out of bounds or are otherwise unprepared or act irresponsibly.

If Mason had gotten lost in a National Park, his rescue would have been free, said David Barna, chief of public affairs for the National Park Service.

New Hampshire officials stress they only bill those who are negligent.

Acerno said that experienced search and rescue volunteers and fish and game staff consider what a reasonable person would have done and measure the person's actions against a hiker responsibility code that calls for knowing the terrain and conditions, taking proper gear, leaving an itinerary and turning back if conditions change. The attorney general's office makes the final determination.

While grateful for rescuers' help, Groom said the $3,360 bill sent to her and a friend was steep for one night on New Hampshire's Baldface Mountain in May. The two had planned a day hike, but took a wrong trail. She blames confusing trail markers.

"I do not believe that charging two young adults such a high fee for a mistake caused by poor trail markers is warranted," she wrote The AP in an e-mail.

Acerno said they were billed because they didn't tell anyone where they planned to hike and didn't have proper equipment, especially a flashlight.

Seasoned winter hiker John Winship, 46, of Boxford, Mass., paid the state $4,000 instead of his $1,479 bill after spending four days on Mount Washington last March when he missed his trail by 50 feet in a snowstorm. The third night out, he was getting frostbite.

Allen Clark, whose volunteer Pemigewasset Rescue Team participated in the Mason search, believes the punishment should be fixed dollar fines, not bills for state workers' time.

"This is an essential service the state should adequately fund," he said.