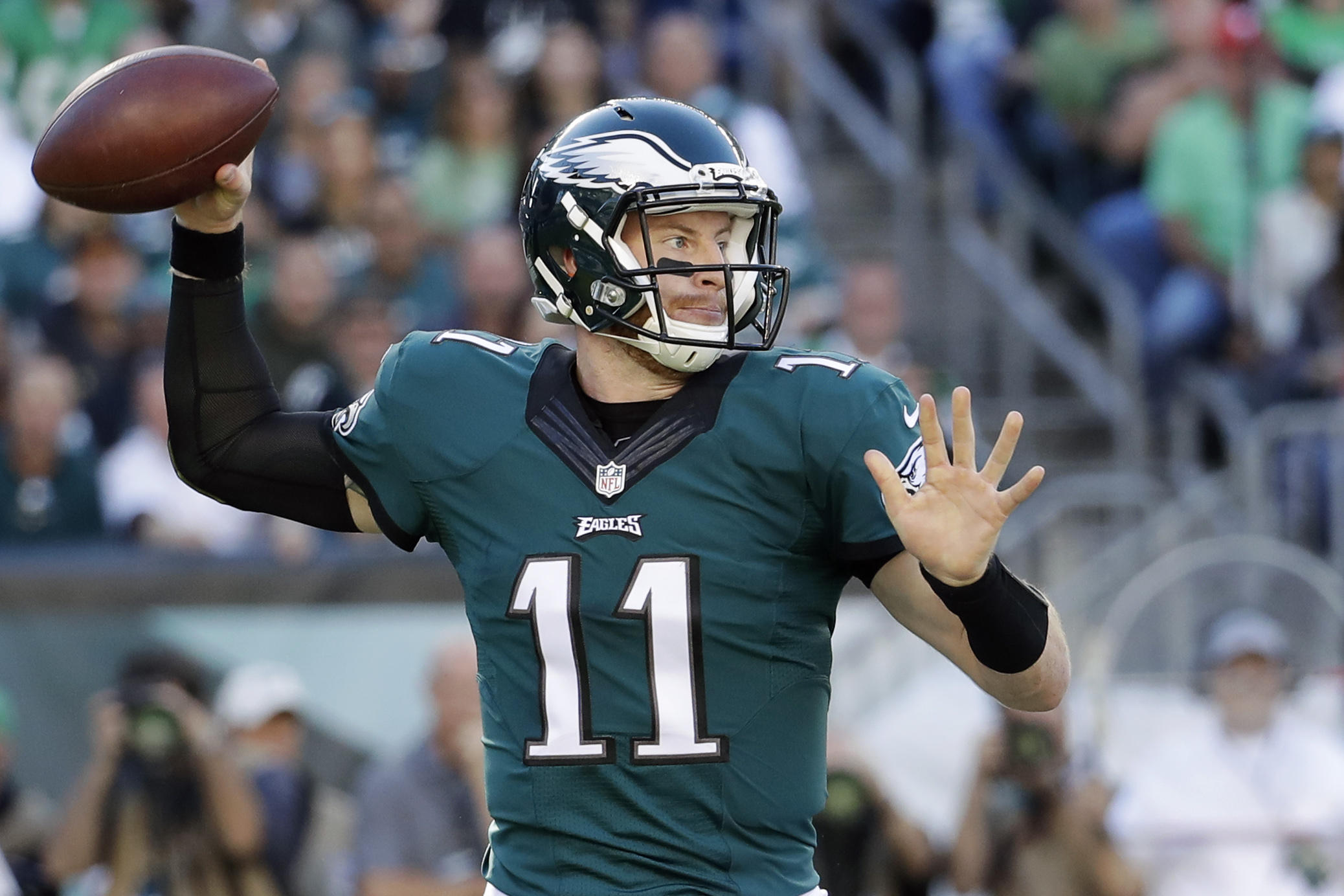 PHILADELPHIA -- Carson Wentz threw for 301 yards and two touchdowns, a fierce defense shut down Ben Roethlisberger and Antonio Brown and the Philadelphia Eagles beat the Pittsburgh Steelers 34-3 on Sunday to remain unbeaten.

The rookie No. 2 overall pick connected with Darren Sproles on a 73-yard, catch-and-run TD and tossed a 12-yard TD pass to Jordan Matthews.

After beating the Browns and Bears in the first two games, the Eagles (3-0) proved they could compete with the big boys. The Steelers (2-1) averaged 31 points the first two weeks and are considered Super Bowl contenders.

Pittsburgh was 19-2 against rookie quarterbacks since 2004. But Wentz is no ordinary rookie.

Everyone is jumping on the Wentz wagon in Philadelphia. And he was the No. 3 quarterback until Sam Bradford was traded to Minnesota just eight days before the season opener.

Sproles finished with six catches for 128 yards and Kenjon Barner and rookie Wendell Smallwood each had their first career rushing TDs.

The defending Super Bowl champions are 3-0 under Siemian, who took over after Peyton Manning retired and Brock Osweiler went to Houston. He completed 11 of 12 passes while rallying the Broncos to a pair of fourth-quarter touchdowns.

The previous Bronco to throw for four touchdowns was Manning in 2014 against the Dolphins. Siemian went 23 of 35 for 312 yards and a passer rating of 132.1.

Siemian had a 41-yard touchdown pass to Emmanuel Sanders to get it started, and stood in under a heavy rush and connected with Demaryius Thomas on a 55-yard score with 4:23 left to clinch it. Sanders finished with nine catches for 117 yards.

The Bengals got their dormant running game going, but were still out of sync as they fell to 1-2 for the first time in five years. Jeremy Hill ran for a pair of touchdowns and 97 yards.

GREEN BAY, Wis. -- Aaron Rodgers threw for 205 yards and four touchdowns, including two in the first half to Jordy Nelson, and Green Bay snapped out of its offensive funk before holding off Detroit.

Rodgers was 15 of 24, leading the Packers to touchdowns on their first three series. Nelson had 101 yards on six catches, returning to the form that made him one of the NFL’s best receivers before missing the 2015 season with a knee injury.

Marvin Jones’ 35-yard touchdown catch with 3:34 left got Detroit (1-2) within seven. Jones had a career-high 205 yards on six receptions.

Matthew Stafford passed for 385 yards and three scores for the Lions, who held advantages in total yardage (418-324) and time of possession, holding the ball for 35 minutes.

The Vikings (3-0) put the clamps on Cam Newton, intercepting the league’s reigning MVP three times and sacking him eight times, one of those resulting in a safety by Danielle Hunter.

The eight sacks were the second-most ever against Newton.

The Panthers (1-2) had come in averaging 42 points per game in their past three home games, but could do little after bolting to a 10-0 lead. The Vikings held Carolina receivers Kelvin Benjamin and Devin Funchess without a catch.

Bradford improved to 2-0 as the Vikings starter, completing 18 of 28 passes for 171 yards. With Adrian Peterson injured, Matt Asiata and Jerick McKinnon combined for 70 yards rushing on 22 carries. Rudolph had seven catches for 70 yards, including a 15-yard TD catch to put the Vikings ahead for good in the early in the third quarter.

SEATTLE -- Russell Wilson threw for 243 yards and a touchdown before suffering a left knee injury and Seattle rolled to a rout of San Francisco.

Wilson was injured with about 10 minutes to go in the third quarter getting pulled down awkwardly on a sack by San Francisco’s Eli Harold. Harold was called for a horse collar penalty, but the bigger concern was how he fell on Wilson’s left leg.

Wilson stayed down on the field for a few moments before walking off. Wilson missed the first play of his career due to injury, but returned to throw one more pass. The completion led to the third of Steven Hauschka’s three field goals for a 27-3 lead and after that Wilson’s day was done.

INDIANAPOLIS -- Andrew Luck shook off a sore throwing shoulder, then watched T.Y. Hilton break a tackle on a 63-yard touchdown pass with 1:17 to play, giving Indianapolis a victory over San Diego.

It’s the second time this season Luck has produced a late score to give Indy a lead in the waning seconds.

But, unlike the season opener two weeks ago, the Colts (1-2) recovered two fumbles in the final 62 seconds to preserve the win.

Luck finished 24 of 37 for 331 yards with one TD and one interception to earn his 15th come-from-behind win - not bad for a guy who missed practice Wednesday and did limited work Thursday in practice because of the injury.

EAST RUTHERFORD, N.J. -- Dustin Hopkins kicked a 37-yard field goal late in the fourth quarter for his fifth of the game and Washington Redskins avoid a near-disastrous 0-3 start with a win over the penalty-and error-prone New York.

Kirk Cousins threw touchdown passes of 44 yards to DeSean Jackson and 55 to Jamison Crowder as the banged-up Redskins (1-2) handed new coach Ben McAdoo his first loss with the Giants (2-1).

Su’a Cravens ended the Giants’ final drive with an interception in New York territory. It was Eli Manning’s second pick of the quarter, with the other coming in the end zone by Quinton Dunbar after New York got to the Redskins 15 on a big play by Odell Beckham Jr.

TAMPA, Fla. -- Case Keenum threw for the Rams’ first touchdown since relocating back to Los Angeles, and Todd Gurley rushed for two more scores in a victory over Tampa Bay.

The Rams (2-1), who did not get into the end zone in the first two games of the season, also scored on Ethan Westbrooks’ 77-yard fumble return and Tavon Austin’s 43-yard reception in the fourth quarter before thunder and lightning caused a 69-minute weather delay with two minutes remaining.

Keenum, who used three field goals to beat Seattle 9-3 in Week 2, completed 14 of 25 passes for 190 yards, two TDs and one interception, which Bucs linebacker Kwon Alexander returned 38 yards for a first-quarter touchdown.

In addition to throwing a TD pass to Austin for a late 11-point lead, he got the Rams on track early with his 44-yard scoring pass to Brian Quick for the franchise’s first TD as the L.A. Rams since 1994.

Jameis Winston threw for 405 yards and three TDs for Tampa Bay (1-2). He threw an interception that set up one of Gurley’s two 1-yard touchdown runs and was stripped by the Rams’ Robert Quinn on the fumble that Westbrooks returned up the left sideline for a 31-20 lead.

Marcus Peters had two of the picks for the Chiefs (2-1), including the first of four off the Jets’ Ryan Fitzpatrick in the fourth quarter. Daniel Sorenson had another, Derrick Johnson returned his 55 yards for a touchdown, and D.J. White snagged his in the end zone with 1:54 left in the game.

Alex Smith was 25 of 33 for 237 yards and a touchdown for Kansas City, while Spencer Ware added 75 yards rushing. But it was the performance of the defense - and all those Jets turnovers - that helped the Chiefs bounced back from their first regular-season defeat in 12 games.

Tucker raised both arms in celebration as his fourth field goal of the day split the uprights with plenty of distance. The Ravens improved to 3-0 for the third time in franchise history and first since 2009.

The Jaguars fell to 0-3 for the third time in the last four years and surely will hear more talk about coach Gus Bradley’s job security. Bradley is now 12-39 in four seasons, the second-worst winning percentage of any NFL coach with at least 50 games.

Quarterback Tyrod Taylor also scored on a 20-yard run at a time the Rex Ryan-coached Bills spent the past week taking the brunt of criticism after opening the season 0-2.

The win also came on the heels of Ryan firing offensive coordinator Greg Roman and replacing him with running backs coach Anthony Lynn.

McCoy scored on 24- and 5-yard runs, and finished with 110 yards rushing after combining for just 117 in his first two games. Taylor had 76 yards rushing, including a 49-yarder, the longest by a quarterback in team history.

NASHVILLE, Tenn. -- Derek Carr threw for 249 yards and a touchdown, and Oakland beat Tennessee with its defense finally coming up with some big plays.

The Raiders (2-1) forced three turnovers and had a sack after coming into this game having given up more yards than any team since at least 1940 through the first two games. Coach Jack Del made a couple of lineup changes, starting linebacker Cory James and rookie safety Karl Joseph, their top draft pick.

Oakland never trailed and took control in the second quarter, scoring 10 points and outgaining the Titans 129-40 to take a 17-3 lead into halftime.

The Titans (1-2) rallied from a 15-3 deficit a week ago in beating Detroit 16-15, and they thought they at least had forced overtime when Marcus Mariota found Andre Johnson alone in the end zone for a touchdown. But officials flagged Johnson for interference on Raiders cornerback TJ Carrie.

MIAMI GARDENS, Fla. -- Jay Ajayi scored on an 11-yard run with 8:26 left in overtime, and Miami escaped with a win over Cleveland.

Ajayi’s winner came one play after Miami quarterback Ryan Tannehill found a wide-open Jarvis Landry for a 32-yard gain, as the Dolphins (1-2) avoided what would be their first 0-3 start since 2011.

Tannehill threw for 319 yards and three touchdowns for Miami, and Landry caught seven of those passes for 120 yards.

Cody Parkey missed three field goals for Cleveland, including a 46-yarder as time expired in regulation.