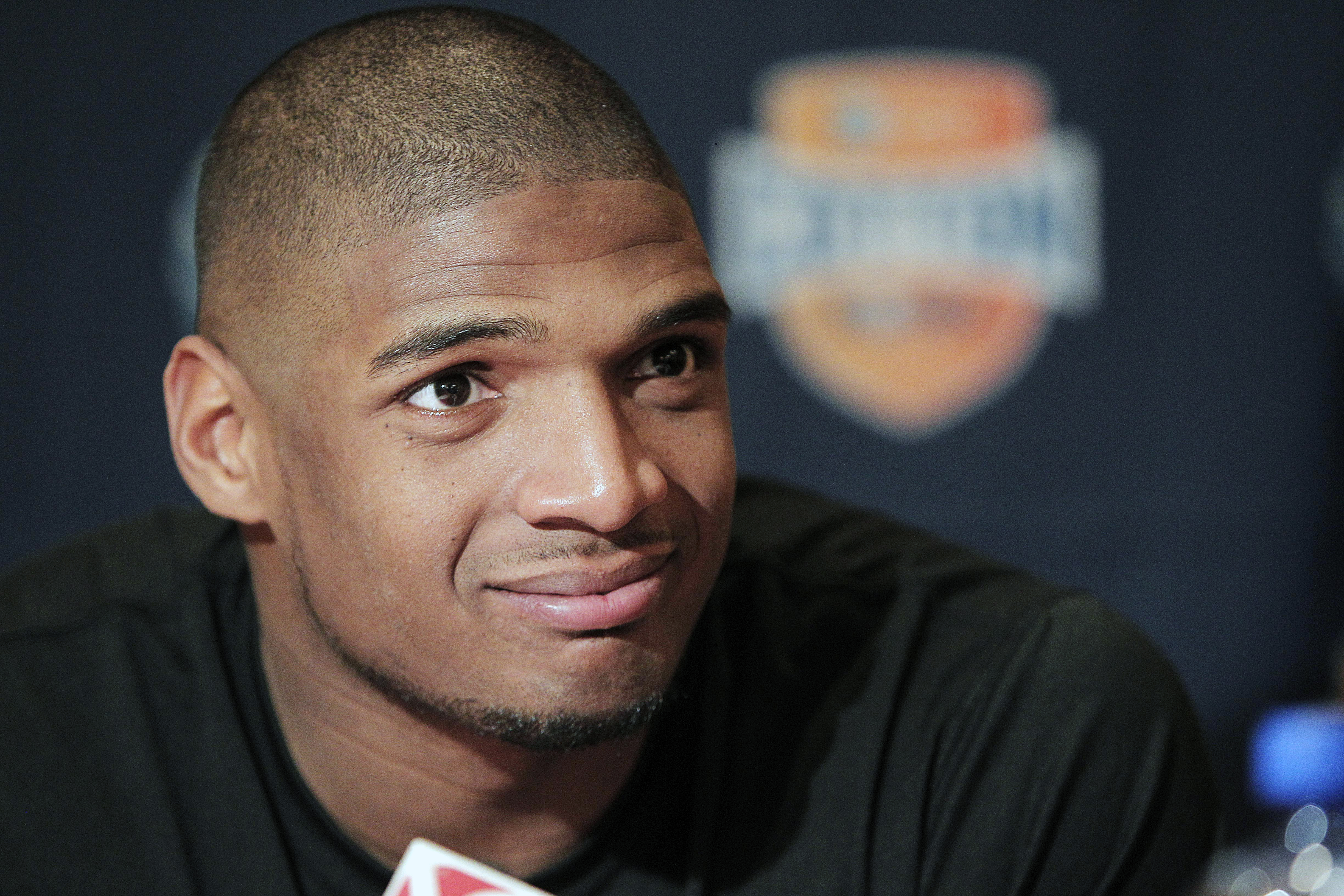 Missouri All-American Michael Sam says he is gay, and the defensive end could become the first openly homosexual player in the NFL.

In interviews with ESPN, The New York Times and Outsports that were published Sunday, Sam said he came out to all his teammates and coaches at Missouri in August.

Sam will participate in the NFL combine later this month in Indianapolis and is currently projected to be a mid-round draft pick in May.

"It's a big deal. No one has done this before. And it's kind of a nervous process, but I know what I want to be ... I want to be a football player in the NFL," he told ESPN.

The 6-foot-2, 255-pound Sam participated in the Senior Bowl in Mobile, Ala., last month after leading the Southeastern Conference in sacks (11.5) and tackles for loss (19). He was the SEC defensive player of the year.

There have been a few NFL players who have come out after their playing days, including Kwame Harris and Dave Kopay.

Last year, NBA player Jason Collins announced he was gay. Collins, a 35-year-old backup center, was a free agent when he came out and has not signed with a new team this season. MLS star and U.S. national team player Robbie Rogers also came out a year ago.

"His courage will inspire millions to live their truth," Rogers tweeted about Sam.

"We admire Michael Sam's honesty and courage," the NFL said in statement. "Michael is a football player. Any player with ability and determination can succeed in the NFL. We look forward to welcoming and supporting Michael Sam in 2014."

Sam's announcement comes at a time gay rights issues and sports have collided at the Olympics in Sochi. Russia's anti-gay law has received much attention, and criticism, because of the games.

"By rewriting the script for countless young athletes, Michael has demonstrated the leadership that, along with his impressive skills on the field, makes him a natural fit for the NFL," said Sarah Kate Ellis, president of GLAAD, a leading lesbian gay, bisexual and transgender media advocacy organization. "With acceptance of LGBT people rising across our coasts - in our schools, churches, and workplaces - it's clear that America is ready for an openly gay football star."

"In fact," Fowler writes, "the feedback I got from NFL folks about Sam's announcement Sunday night was positive.

There's little doubt about that with Sam, who might not be a first-rounder but is considered the ninth-best defensive end in the draft, according to CBSSports.com."

Coaches, General Managers and others responsible for interviewing and hiring draft-eligible players and free agents must not seek information concerning or make personnel decisions based on a player's sexual orientation. This includes asking questions during an interview that suggest that the player's sexual orientation will be a factor in the decision to draft or sign him.

Examples: Do you like women or men? How well do you do with the ladies? Do you have a girlfriend?

Carolina Panthers running back DeAngelo Williams tweeted: "I could care less about a man's sexual preference! i care about winning games and being respectful in the locker room!"

Williams' teammate, cornerback Drayton Florence, posted on his Twitter account: "No comment but it can be a distraction in the locker room. At least he's open with it much respect!"

Sam said many people at the Senior Bowl, an all-star game for NFL prospects, seemed to know he was gay.

"I didn't realize how many people actually knew, and I was afraid that someone would tell or leak something out about me," he told ESPN. "I want to own my truth. ... No one else should tell my story but me."

Sam told the Times he dated a man on the Missouri swim team and came out to teammates L'Damian Washington and Marvin Foster about a year ago, before letting the whole team know during last preseason.

"Coaches just wanted to know a little about ourselves, our majors, where we're from, and something that no one knows about you," Sam told ESPN. "And I used that opportunity just to tell them that I was gay. And their reaction was like, 'Michael Sam finally told us.'"

Missouri coach Gary Pinkel said in a statement Sunday night he was proud of Sam and how he represented the program.

"Michael is a great example of just how important it is to be respectful of others, he's taught a lot of people here firsthand that it doesn't matter what your background is, or your personal orientation, we're all on the same team and we all support each other," Pinkel said. "If Michael doesn't have the support of his teammates like he did this past year, I don't think there's any way he has the type of season he put together."

Missouri linebacker Donovan Bonner was a teammate of Sam's for five years.

"We knew of his status for 5 years and not one team member, coach, or staff member said anything says a lot about our family atmosphere," Bonner tweeted.

CBSSports.com's Fowler observes, "For the last few years, I've heard questions persist about whether the turbocharged NFL culture -- which often resorts to anonymous bashing through the media -- could handle a gay player. Mizzou showed it can be done. Perhaps a college football locker room is a different dynamic because players aren't paid, but it's still high-level football. Any Mizzou bigotry could have made the last six months mighty uncomfortable for Sam.

"That doesn't seem to be the case here."