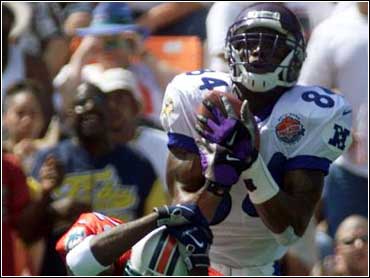 The Minnesota receiver set records with nine catches for 212 yards, and Mike Alstott scored three touchdowns in the NFC's 51-31 victory Sunday in the highest-scoring Pro Bowl ever.

"We had a lot of fun," said Moss, selected the MVP. "With Alstott rumbling through there, we did some good things. I'm not really into individual awards and things like that, but I guess I'll take them when they come."

"He's one of the best," Madison said. "They put him in a situation to make plays, and that's what he did."

Moss' last catch was a 25-yard TD reception from Carolina's Steve Beuerlein with 1:05 to play that closed the scoring.

The score seemed to bring out some bad feelings between the two teams, who accused each other of breaking Pro Bowl rules that prevent blitzing and rushing the kicker.

Arizona's Aeneas Williams and Tampa Bay's Derrick Brooks returned interceptions for touchdowns as the NFC dominated the game from the start in snapping a three-game losing streak.

Alstott, the Tampa Bay fullback, scored on runs of 1, 3 and 1 yards. He finished with 13 carries for 67 yards.

"I'm making up for the last two Pro Bowls," Alstott said. "The last few years I've been here, we've been on the downside, so it's fun being on the upside."

Brooks picked off a pass from Jacksonville's Mark Brunell and raced untouched 20 yards for a touchdown to make it 44-24 with 11:12 left.

Jagars receiver Jimmy Smith caught three touchdown passes, and finished with eight catches for 119 yards. His last score, a 52-yarder from Indianapolis' Peyton Manning, made it 44-31 with 6:30 to play.

"It's the Pro Bowl, man. It's a chance to go out there and see what you can do," Smith said. "Fortunately, I did."

Manning had two touchdown passes and two interceptions, including the 62-yard return by Williams that gave the NFC a 7-0 lead less than three minutes into the game.

Williams had an open field after Colts receiver Marvin Harrison fell down, and he raced down the left sideline for the score.

The next time the NFC had the ball, St. Louis quarterback Kurt Warner connected with Moss for 48 yards to put the ball on the AFC 5. Warner, the Super Bowl MVP, was 8-of-11 for 123 yards.

Detroit's Jason Hanson kicked a 21-yard field goal to make it 10-0. He had three field goals on the day, including a 51-yarder at the end of the first half that tied a Pro Bowl record.

The AFC got on the board when Brunell teamed with Smith on a 5-yard touchdown pass with 30 seconds left in the first quarter, capping a 68-yard drive in which Tennessee's Eddie George gained half the yards.

The NFC pushed its lead to 17-7 three minutes into the second quarter on a 1-yard run by Alstott, following a 46-yard pass from Warner to Moss.

After an exchange of turnovers, Oakland quarterback Rich Gannon connected with Kansas City tight end Tony Gonzalez on a 10-yard pass to make it 17-14.

Glyn Milburn of the Chicago returned a punt to the AFC 43, starting a five-play drive that saw Alstott score from the 3 after running for 27 yards the previous play.

Manning then led the AFC on an 87-yard drive that ended with a 21-yard TD pass to Smith with 20 seconds left in the half.