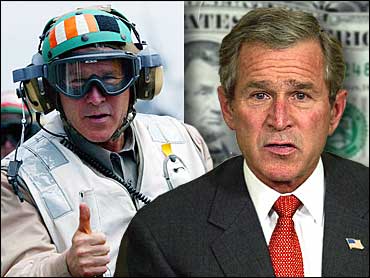 A day after declaring victory in the battle of Iraq, President Bush turned his attention to the nation's shaky economy, urging Congress to quickly pass his tax cut plan.

"That 6 percent (jobless rate) should say loud and clear to both political parties of the United States Congress that we need robust tax relief so our citizens can find a job," the president said during a visit to a defense contractor in Northern California's Silicon Valley.

The Silicon Valley has been among the hardest-hit by recession, a fact Mr. Bush used to pitch his tax cuts.

"I know there's people hurting here in Silicon Valley," he said. "This incredibly vibrant part of the American economy over the last couple years has not been meeting its full potential. ... The plan I just outlined is one that will boost the economy in Silicon Valley."

Support for the president's package is tepid, and Democrats say a better way to stimulate the economy is to extend unemployment benefits a second time. The current extension expires at the end of the month, cutting off benefits for millions of jobless workers.

Mr. Bush blew up enemy tanks from the cockpit of a simulated fighting vehicle during Friday's visit to Defense Industries, developer of the Bradley Fighting Vehicle, in Santa Clara, Calif. The company also made the Hercules tank recovery vehicle that pulled the statue of Saddam Hussein down in Baghdad.

"The guy with the sledgehammer on the statue needed a little help," Mr. Bush told about 1,800 people at the firm's development plant.

The visit followed a formula the president has developed in the period following the war and the run-up to his re-election campaign: He uses a defense contractor as the setting for a speech that bridges the seemingly disparate themes of the economy and national security.

Last month he did the same thing at a Boeing plant in St. Louis and at a tank manufacturer in Lima, Ohio.

Some of Mr. Bush's fellow Republicans have said he is shifting gears to focus more intensely on the economy. But White House spokesman Ari Fleischer dismissed talk of such a "pivot," saying both issues are top priorities the president.

"The war on terror remains an important national priority to protect our country and protect our people," Fleischer said. "Economic security is also at the heart and soul of what he is working on."

On his swing through Northern California, Mr. Bush was picking up Australian Prime Minister John Howard and ferrying him back to Mr. Bush's central Texas ranch for a weekend summit. It was a highly visible thank-you gesture to a faithful ally in the Iraq war. In contrast, Mr. Bush scrubbed a visit planned for Monday with Canadian Prime Minister Jean Chretien, who questioned Mr. Bush's path on Iraq.

Instead of meeting with the Canadian leader, Mr. Bush was making a quick pass Monday through Arkansas, a state he only narrowly won in the 2000 election.

Earlier Friday, Mr. Bush departed the USS Abraham Lincoln by helicopter the morning after a nationally televised speech in which he declared victory in the battle of Iraq. Mr. Bush cast the conflict as part of a broader war on terror. He called the defeat of Saddam Hussein, "one victory in a war on terror" that still goes on.

"Major combat operations in Iraq have ended," he said from the deck of the Lincoln, which launched thousands of jets during the war. "In the battle of Iraq, the United States and our allies have prevailed."

Before the speech, Mr. Bush flew to the carrier on a Navy jet and made a screeching stop as his plane was snagged by a cable stretched across the deck.

The 5,000-member crew of the USS Lincoln arrived at port in San Diego on Friday afternoon, greeting loved ones after nearly 10 months at sea.